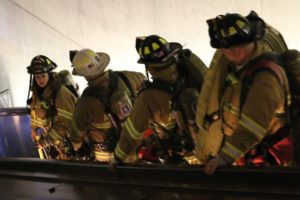 Metro riders looking to take the Yellow Line into D.C. might have to find another way to get into the District this weekend.

The line is scheduled to shut down between the Pentagon and L’Enfant Plaza stations from 8:30 a.m. to 2 p.m Sunday for more than 100 people to participate in a “full-scale response drill” for a “simulated” train derailment, according to the Washington Metropolitan Area Transit Authority. Travelers should use the Blue Line to enter D.C. instead.

“The exercise, which will take place on the elevated track approaching the Pentagon station over the Potomac River, will allow emergency responders to test their capabilities on the aerial structure in coordination with water rescue teams,” WMATA said in a news release. “In addition, the drill will simulate real-world conditions to test coordination and communication between on-scene responders, Metrorail operations staff, Metro Transit Police and support personnel.”

The drill is set come about a month after a “minor” train derailment at the East Falls Church Metro station.