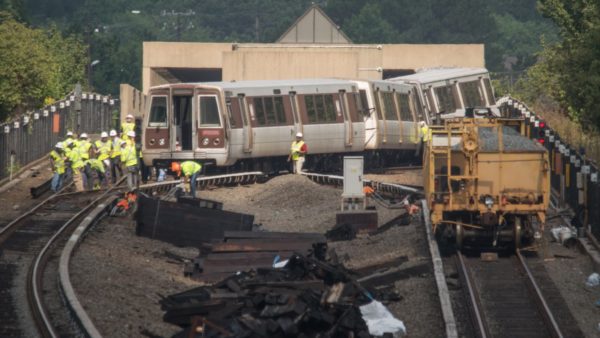 Update at 2:45 p.m. — Orange and Silver line service will remain suspended between Ballston and West Falls Church through at least Saturday, Metro said this afternoon.

(Updated at 10:35 a.m.) Two people were evaluated for injuries after a “minor” train derailment at the East Falls Church Metro station.

Orange and Silver Line service remains shut down between West Falls Church and Ballston as a result of the derailment, and will remain shut down through Friday evening, according to Metro. Shuttle buses are running between the stations.

About 75 passengers were on the train when the derailment happened, around 6:30 a.m. Train cars remained upright and the passengers were able to offload “without further incident,” according to Metro.

The derailment happened as Metro’s “SafeTrack” maintenance work was being performed on one of the tracks between Ballston and East Falls Church.

@ARLnowDOTcom What's going on at EFC Metro? Someone said it sounded like either a gunshot or explosion.

#FollowUp Train derailment is at the platform & described as minor, passengers being held on the train until they can be safely offloaded.

#FollowUp Approx. 75 people are on the train. The train is in the process of being unloaded now, with no passengers reporting injuries.

#FinalUpdate EFC- 2 passengers have been evaluated for minor injuries. Scene has been transferred to #wmata. FD units going in service.