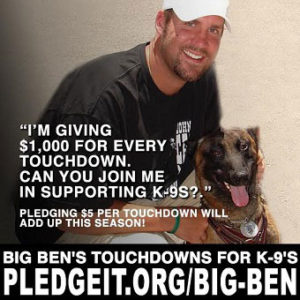 Roethlisberger’s foundation will be distributing a grant to Arlington County Police in order to purchase ballistic vests for the department’s seven K-9s. Roethlisberger and the Steelers will be playing the Washington Redskins on Monday.

“During the 2016 NFL season, The Ben Roethlisberger Foundation will be distributing grants to K-9 units of police and fire departments in the cities and surrounding communities of each regular season away game for the Steelers,” said the quarterback’s website. “The Foundation will also distribute several grants to the Pittsburgh area. Ben invited police and fire departments across the country to submit proposals detailing their needs.”

“Our K-9s are integral members of the Arlington County Police Department, both in the field and from a community outreach perspective,” ACPD Chief Jay Farr said in a statement. “We are grateful to receive this grant so we can provide our K-9s with ballistic vests as an added layer of protection to keep them safe.”

Last season the Roethlisberger Foundation made more than $170,000 in grants to K-9 units across the country. Roethlisberger has pledged $1,000 to the foundation for every touchdown he throws this season and is seeking additional donations from fans.