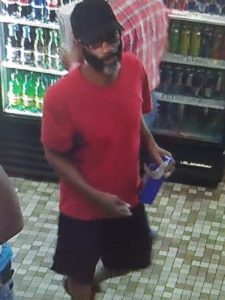 The man who robbed the Sunoco gas station in Rosslyn this week has robbed at least seven gas stations, convenience stores and drug stores in the D.C. area since last October, according to the FBI.

The Bureau says the man robbed a CVS in Seat Pleasant, Maryland and an Exxon in Northwest D.C. Tuesday morning, before robbing the Sunoco around 11 a.m. The man implied that he had a gun and then fled with cash, the FBI says.

The suspect, who’s considered to be “armed and dangerous,” is described as “a black male, approximately 5’10” tall, between 40 and 50 years of age, with a medium complexion and a black and gray colored beard.”

The FBI is offering a reward of up to $5,000 for information that leads to the suspect’s identification, arrest and conviction. Anyone with information is encouraged to call the FBI Washington Field Office at 202-278-2000.