It goes without saying the federal government has a lot of data, perhaps an incomprehensible amount of it, and all of it stored away on servers near and far. 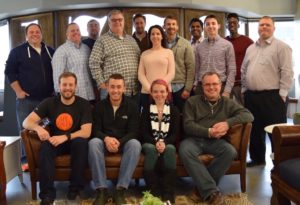 Think of all the contracts, bid proposals, analyses, surveys and every other piece of internal and external business communication Washington receives, creates and keeps over the decades, and you have a gi-normous pile of virtual information. And much of it is in accessible, and therefore, not very useful.

Three-and-a-half years ago John O’Brien, a former government employee with a penchant for building things, decided to create a way that made that digital information accessible, and therefore useful, to government agencies and to companies eager to do business with the government. He started 540, named for the sum of the internal angles of the Pentagon, knowing that his experience within the government and later at a contracting firm could help make dealing with the government successful.

He was right: Just three-and-a-half years later the 18 employees — more than double this time last year — of 540 stay busy at Crystal City’s 1776 startup incubator helping the government and its contractors get things done. In fact, that’s their mantra: #getshitdone. 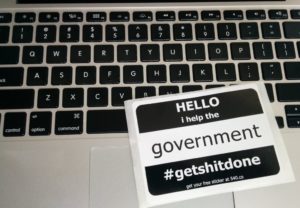 “We have a mission of connecting internal groups across the government by continuing to promote/deliver data sharing strategies,” wrote O’Brien in an email conversation. “Much of this has begun in the ‘government -> public’ realm — but we find it is still behind in the ‘government <-> government’ space.

“We are working hard to ensure that the same approaches and technologies are used to accelerate that data sharing as well.” 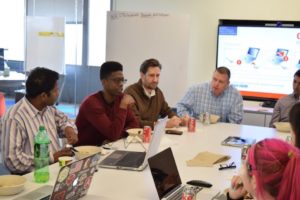 But because of the age-old labyrinth that impedes progress — you don’t see too many “disruptive” federal tech programs — assistance is required.

To do this, 540 is using tools not uncommon in Silicon Valley, but 540 also builds its own tools, Bock said, “so you access data, see it and understand it.”

For example, if a company that lost out on a federal bid wanted to know what they could have done better next time by comparing their bid to others or looking for trends that work, the bid and contract data might be published in a way that makes it unsearchable.

“We build what we call a ‘data harvester,'” said Bock. “It extracts the data, indexes it and makes it searchable. You couldn’t do that before.”

To date, 540 is totally bootstrapped and as a services company, “that’s not necessarily difficult,” O’Brien said.

“We have government contracts that we are currently executing against and driving revenue and allowing us to grow our business,” added Bock.

As for finding new clients, 540 is in big on networking, to the point of taking a leadership role in presenting new or small but always like-minded companies–many of them from Arlington–to agencies likely to work with them.

“We take every opportunity to speak at conferences and appear at events and trade shows to get the message out about 540 and what we do,” he said. “And for companies not accustomed to working with the federal government, it can be very daunting.”

The good news is, the federal government is trying to break down those barriers “and make it easier and make it accessible,” said Bock. “We feel we’re sort of a good bridge for that.”