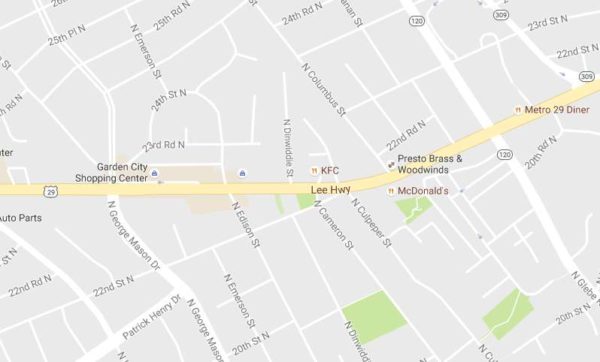 Update at 1:45 p.m. — In a statement, Arlington County Police say the teen was in the crosswalk when she was struck by a car traveling eastbound on Lee Highway.

The driver of the vehicle rendered aid to the victim and remained on scene until the arrival of police units. Sun glare was present for eastbound traffic on Lee Highway at the time of the collision and is being investigated as a contributing factor. No charges have been filed at this time. The investigation is ongoing.

Earlier: Lee Highway is closed in both directions between George Mason Drive and N. Glebe Road this morning due to an investigation.

A female pedestrian was struck by a driver in a sedan just after 7:30 a.m., said Arlington County Police spokeswoman Ashley Savage. She suffered serious but non-life-threatening injuries and was transported to the trauma center at George Washington University Hospital.

Savage said the victim has been identified as a 15-year-old girl who was walking to school at the time. The striking driver remained on scene, Savage said. The exact circumstances surrounding the crash have not yet been determined.

ACPD’s Critical Accident Team is continuing to investigate the collision and there’s still no word on how long the closure is expected to last.