It’s wonderful to be able to drink and talk about pumpkin ales and Oktoberfest lagers in the actual season they are made for. With the first day of fall on Thursday, we are officially in the season of beers that began appearing on store shelves in August. Some of these and some recent releases have become my “faves” of the season. I’ve gone back to these beers, savoring them, and now I’d like to share them with you. 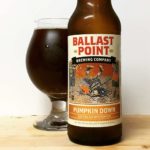 San Diego’s Ballast Point Brewing is known more for it’s West Coast IPAs and fruit infused beers than it is for earthy, spiced brews. But, every once in a while, they make an Indra Kunindra — a curried stout — or this pumpkin-loaded version of their potent Scottish ale, Piper Down. Once you pour this dark amber beer, the earthy aroma of squash mingles with cinnamon and nutmeg obscuring a malty honey wheat. Ballast Point avoids creating a pumpkin pie beer by rooting this in the malt forward style of the Scottish Ale. Slightly sweet and spiced at first, Pumpkin Down turns slightly bitter with the flavor of cooked pumpkin flesh. I’ve bought a couple sixers of this delicious Fall mashup. It’s tasty and versatile — enjoy it with a meal or on it’s own. 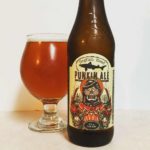 Punkin Ale has been a staple of the Dogfish Head line up since their earliest days — 1995. It’s distributed in nearly every state and might be the entry point for many into their beers. Though they have controls and labs and all, they are still a craft brewery that relies on humans for analyzing the flavors of their beers. What this means is that some years their Punkin Ale is just alright and some years it’s fantastic. This year’s falls into the latter category — and it has awesome label art. Bursting with aromas of sweet potato pie, cinnamon, nutmeg and sweet biscuit, Punkin seems to be poised to be a Pumpking-like beer. But it isn’t. It’s a solid brown ale that warms the palate with pumpkin pie spices, more winter warmer than typical pumpkin ale. Only in the finish is there a pumpkin presence, and it tends to be more of an earthiness than straight up pumpkin. Whether you’re looking for another pumpkin beer to try or can’t stand the sight of another, this beer might just be right for you. Available in four-packs as a strongish seasonal, this beer is worth a visit or a revisit. 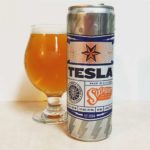 You can always rely on Brooklyn’s Sixpoint Brewery to have fun with it beer names. Tesla, named for the inventor and not the electric luxury car brand, refers to the story that Nikolai Tesla once electrified a neighborhoods water supply causing homeowners to get a shock. Joining the recent trend of hoppy lagers or so-called India Pale Lagers (IPLs), Sixpoint has “hop-charged” this lager with American hops for a big, juicy lager. As you’d expect, the aroma is packed with tropical fruit and pine sap from the hops with a hint of Nilla wafer from the underlying lager. This beer is crisp, which is to say that it’s a typical lager, but almost immediately the hop flavors explode your mouth. What I enjoy most about hoppy lagers is that the beer is a nearly neutral vehicle for the varied and robust flavors of hops. This strong lager comes in the signature Sixpoint can and it goes down smooth with very little bite. 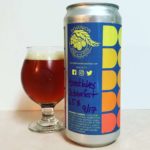 I had to include at least one Oktoberfest beer in this article. Cleveland’s Great Lakes Brewing Company delivers one of my Fall Faves in their own Oktoberfest. Hewing close to tradition, they brew their Fall lager with the darker Munich malt, which lends this beer its brown bread and raisin aroma. Malt is the name of the game here, too. I confess to crave the sharper flavors of an IPA or a sour, but each Fall there is something comforting about a malt-bomb of an Oktoberfest beer. The flavors here round out with a nuttiness that is satisfying. Grab a couple bottles or a Crowler of this traditional style and enjoy the cooling days.

These favorites and more are available now at Dominion Wine and Beer. Cheers!