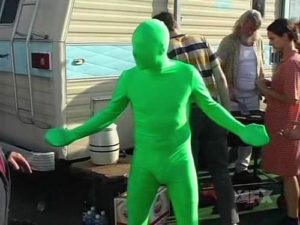 A man dressed in a green bodysuit was cursing at passersby in Shirlington yesterday (Tuesday) afternoon, but no arrests were made.

Police were called around 4:30 p.m. for a man dressed like “Green Man” — a green full-body outfit that also covered his face — who was yelling and accosting people near the Shirlington Branch Library and the Harris Teeter grocery store.

Officers responded but were unable to find anything warranting criminal charges.

“Police were dispatched to the 4200 block of Campbell Ave at approximately 4:32 p.m. for the report of a suspicious man screaming profanities,” said Arlington County Police spokeswoman Ashley Savage. “Police responded to the area and after investigation determined that no crime had occurred.”