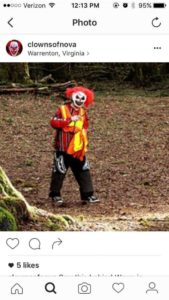 Amid “creepy clown” threats locally and across the country, comes a potential sighting of a clown in an Arlington neighborhood this morning.

According to scanner traffic, a caller told police that her child saw a clown emerge from some woods in the Arlington Mill neighborhood around 11 a.m. today (Thursday).

“Police were dispatched to the 800 block of S. Frederick Street at approximately 11:36 for a possible clown sighting,” Arlington County Police spokeswoman Ashley Savage confirmed to ARLnow.com.

“There was a half an hour delay in reporting to police,” Savage continued. “Police arrived on scene and canvassed the area with negative results. An officer will remain in the area conducting extra checks. If citizens see anything suspicious, we encourage them to report information to dispatch immediately at 703.558.2222.”

On Monday ACPD stepped up its presence at schools in response to threatening messages on social media. Despite being exposed as youthful hoaxes in many parts of the country, numerous social media accounts — including the one pictured above — still purport to belong to local “clown gangs.”

Police take these reports seriously. Reporting party was young juvenile. Numerous citizens in area did not witness anything suspicious. https://t.co/hnHh1DtRx9