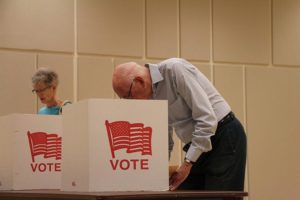 When Arlington residents head to the ballot box on Nov. 8, they won’t just choose candidates for office. They’ll also be able to vote on four local bond issues and two state constitutional amendments.

Taxpayers will be asked to approve nearly $315.8 million in general bond obligations. Additionally, they’ll be able to vote for or against adding “right-to-work” and property tax exemption amendments to the Virginia constitution.

Members of the voting public can only vote “yes” or “no” to each of the four bond questions on the ballot. Each question rolls multiple projects into larger categories.

Voters will also be able to choose whether to add two amendments to the Virginia constitution:

Under the “right to work” amendment, employers would be banned from requiring union membership. Though Virginia already has a “right to work” statute, ratifying it as a constitutional amendment would make it harder for future lawmakers to repeal the rule.

The issue has sparked a debate between unions and legislators, according to The Washington Post. Supporters, like Rep. Richard P. Bell (R-Staunton) say an amendment is necessary to protect and preserve the state’s longstanding statute. Unions, however, say the amendment would be yet another blow to organized labor in the state.

Other critics of the amendment say it’s just not necessary, as Virginia has been a “right to work” state for more than 70 years without a constitutional amendment. One Democratic state senator even called the ballot question a “political stunt,” according to WAMU.

The other proposed amendment would, if passed and then acted upon by the Virginia General Assembly, allow localities to exempt from property taxes the spouses of first responders — law enforcement officers, firefighters, rescuers and medics — killed in the line of duty, provided they haven’t remarried.

Spouses of military veterans killed in the line of duty already can be exempted from local property taxes under a previous constitutional amendment.