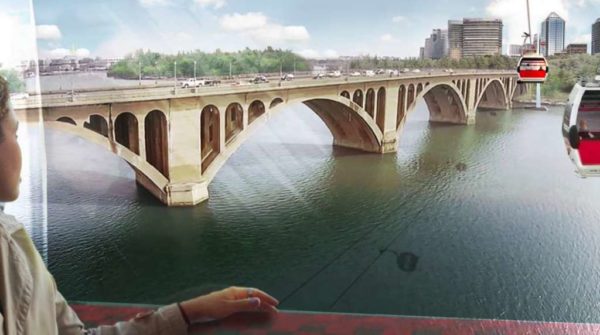 Arlington County Board Chair Libby Garvey says the county will be reviewing the findings of a study on the potential for a Rosslyn-Georgetown gondola system, which was released this morning.

The study found that a gondola system would cost $80-90 million to construct and $3.25 million annually to operate. The gondola would have a “projected minimum average daily ridership of 6,500 people (primarily workers and residents) and a capacity of 2,400 people per hour per direction.”

“Like Washington D.C.’s leadership, we find the results of the study interesting,” Garvey said in a statement. “We will be reviewing the report and doing significant analysis before making any decisions. We also will be talking with our regional partners.”

“It is important to note that no proposals have been made yet about how the gondola would be funded,” Garvey continued. “Should we decide to continue to explore whether or not to build a gondola, funding proposals would also affect the Board’s decision on whether to actually build the project.”

The full press release on the gondola study is below.

The Georgetown-Rosslyn Gondola Feasibility Study was released this morning on GeorgetownRosslynGondola.com. The study, conducted by a consulting team led by ZGF Architects over a five-month period, identifies and details the demand, financial, regulatory, design and real estate considerations of an aerial gondola lift connecting the Arlington, Virginia Rosslyn neighborhood and Washington, D.C.’s Georgetown neighborhood.

The consulting team, along with Georgetown Business Improvement District (BID) President and CEO Joe Sternlieb and Rosslyn BID President Mary-Claire Burick, will discuss the study’s findings and their implications at a public information meeting later today from 6 – 7:30 p.m. at the Georgetown Theater on Wisconsin Avenue in Washington.

“The charge for this study was not to sell the idea of a gondola, rather it was to evaluate if a gondola is technically feasible, from a multi-disciplinary approach, and to conceptually define the feasibility parameters.” said Otto Condon, Principal, ZGF Architects. “With our finding that a gondola is feasible, the decision to move forward is a discussion for both sides of the Potomac to have, both individually and collaboratively.”

“To put the study findings in context, as the region grows in population, we need to be exploring new ways to efficiently move people. If the Georgetown-Rosslyn gondola was viewed as Georgetown’s Metro station, ridership would be higher than over half the Metro stations in the DC-area while capital and operating costs would be lower,” said Joe Sternlieb, president and CEO, Georgetown BID. “This could be an attractive, cost-efficient regional transportation option that would give thousands of daily commuters, students, residents and tourists a quick, affordable, and reliable way to travel between neighborhoods.”

The study suggests economic benefits consistent with transit oriented development can be expected such as increased real property values, restaurant, retail and hotel sales, as well as the likelihood of faster office and residential leasing.

“From an Arlingtonian perspective, you can see how the gondola would help attract businesses that want to locate in accessible urban hubs, residents who want to navigate between neighborhood amenities without cars, and tourists who want to see beautiful skylines and views,” said Mary-Claire Burick, president, Rosslyn BID. “I was also pleased that the renderings from the study incorporate high-quality design that enhances the public realm and is mindful of view sheds.”

Regulatory Approvals and Next Steps

The feasibility study also deemed the gondola to be legally permittable – making it feasible from a regulatory standpoint. Although construction of the gondola would require review by as many as 20 local, state and federal agencies, and require a federal Environmental Impact Statement, there were no findings that the project could not be approved and permitted.

“I have long liked the idea of having a gondola to link Georgetown with Rosslyn and the Metro system,” said Mary Cheh, D.C. Councilmember and Chair of the Committee on Transportation and the Environment. “It is an innovative and forward-thinking way to address transportation issues in the District and our region. This study suggests that the gondola option is both practical and feasible, and I’d like to work with my colleagues to explore next steps toward implementation.”

The gondola project’s next phase will be for leaders on both sides of the river to review the feasibility study and meet to discuss whether and how to proceed to the next phase of planning. The Environmental Impact Study process is estimated to take three to four years. If approved, it would take two years to construct the gondola. Further decisions would need to be made on how the construction and operation of the project would be funded.

“Like Washington D.C.’s leadership, we find the results of the study interesting. We will be reviewing the report and doing significant analysis before making any decisions. We also will be talking with our regional partners. It is important to note that no proposals have been made yet about how the gondola would be funded.  Should we decide to continue to explore whether or not to build a gondola, funding proposals would also affect the Board’s decision on whether to actually build the project,” said Libby Garvey, Chair, Arlington County Board.

The Georgetown-Rosslyn Gondola idea emerged from the Georgetown 2028 planning process as a potential high-speed transit connection that could efficiently solve many transit issues for the commercial, residential, university, hospital and visitor constituencies in Georgetown and Rosslyn. The gondola project is also consistent with the Realize Rosslyn sector plan, which prioritizes creating a vibrant urban center with multimodal transit options.