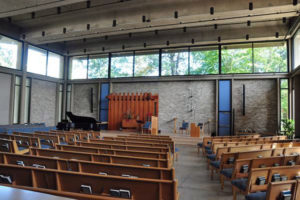 (Updated at 11 a.m.) It’s been planned for at least a week but the results of the election may bring renewed interest to a talk at the Unitarian Universalist Church of Arlington tonight.

The church, at 4444 Arlington Blvd, is holding a discussion entitled “Islamophobia: Replacing Fears with Facts.” The event is scheduled to start at 7:30 p.m.

The Committee for Peace and Justice in Israel/Palestine (CPJIP) of the Unitarian Universalist Church of Arlington is hosting a talk entitled: Islamophobia: Replacing Fears with Facts, presented by Ms. Meira Neggaz, Executive Director of the Institute for Social Policy and Understanding (ISPU), in Washington, D.C.

Neggaz will present ISPU’s groundbreaking research on Islamophobia and will lead a discussion of what each of us can do to combat discrimination against historically marginalized groups, including American Muslims.

The talk is open to the public. Congregants from the Moroccan American Muslim community and neighboring Christian and Jewish congregations are expected to attend.

END_OF_DOCUMENT_TOKEN_TO_BE_REPLACED

More Stories
Morning Poll: How Are You Feeling About Last Night’s Election?Record Number of Votes Cast in Arlington