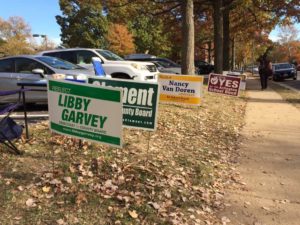 A record number of votes were cast in Arlington last night, though overall turnout did not set a record.

“Unofficial turnout was a record high of 121,807 but because of population increases, that represents just 82 percent of our 148,154 registered voters, falling a little short of the 85 percent turnout record set in 1992,” said Arlington County Registrar Linda Lindberg.

That mirrors the 2012 election, in which numerical turnout set a record in Arlington but percentage-wise the turnout was just short of the record. 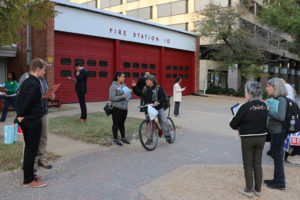 Arlington County Board Chair Libby Garvey won re-election last night. Her swearing-in ceremony has not yet been scheduled but “will likely take place next month,” a county press release (below) noted.

Garvey applauded Arlington voters for approving all four bond issues on the ballot.

“On behalf of County leadership, I want to thank our residents for supporting every bond measure on the ballot, making that commitment to better, safer roads, parks, community centers, fire stations and schools in Arlington,” she said in a statement. “We will work hard to make sure these funds will be invested wisely and managed carefully as a public trust in our shared future.”

Arlington voters on Tuesday re-elected Libby Garvey to the County Board as she concludes her year as Board Chair. Garvey won 70.11 percent of ballots cast with 72,542 votes in the Nov. 8 election according to 100 percent of results posted this morning by the Virginia State Board of Elections.

Garvey was first elected to the Board in March 2012 in a special election to complete the term of now-state Senator Barbara Favola. Garvey won a full four-year term that fall and now has been re-elected to serve through 2020. Her current year-long role as Board Chair concludes next month with the job traditionally taken up by another member in the new year.

“Thank you Arlington voters for once again taking to the polls in such large numbers and for continuing to place your trust in me,” Garvey said. “Most importantly, on behalf of County leadership, I want to thank our residents for supporting every bond measure on the ballot, making that commitment to better, safer roads, parks, community centers, fire stations and schools in Arlington. We will work hard to make sure these funds will be invested wisely and managed carefully as a public trust in our shared future.”

The bond referenda were:

Metro and Transportation: $58.79 million (passed with 78 percent of the vote)

Local Parks and Recreation: $19.31 million (passed with 76 percent of the vote)

Community Infrastructure: $98.85 million (passed with 75 percent of the vote)

Arlington Public Schools: $138.83 million (passed with 79 percent of the vote)

Projects include: an addition at the Stratford building to add 339 seats, the new school at the Wilson site to add an estimated 775 seats, renovation of the Career Center/Arlington Tech to add 300 seats, planning and design to build an additional 1300 secondary seats at locations to be determined, and HVAC, roofing and other infrastructure improvement projects at existing APS buildings.