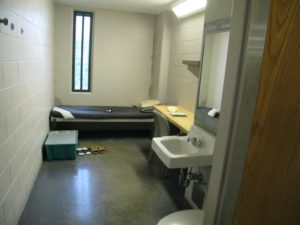 The Arlington County Sheriff’s Office will pay a quarter million dollars to a deaf man after it failed to provide him with sign language interpreter services.

The U.S. Attorney’s Office announced a settlement agreement in the case under the Americans with Disabilities Act this afternoon.

Today the U.S. Attorney’s Office announced a $250,000 settlement agreement under the Americans with Disabilities Act (ADA) with the Arlington County Sheriff’s Office (ACSO) that it failed to provide appropriate auxiliary aids and services to an individual who is deaf.

The U.S. Attorney’s Office’s investigation began when it was made aware of allegations that during a 40-day incarceration at the Arlington County Detention Facility (ACDF), the ACSO, which operates ACDF, violated the ADA by failing to provide appropriate auxiliary aids and services, including sign language interpreter services, to a former detainee who is deaf during complex communications with the ACDF’s staff and its medical contractor.  Further, the complainant, who is unable to read and write in English, alleged that the ACDF’s staff failed to furnish him with a telecommunication device that would ensure that he could communicate with individuals outside the detention facility, including his counsel.

“People who are deaf or hard of hearing must be able to communicate clearly with law enforcement officials,” said Tracy Doherty-McCormick, First Assistant U.S. Attorney for the Eastern District of Virginia.  “Through this settlement agreement, the Arlington County Sheriff has taken important steps to ensure that the operations of the Arlington County Detention Facility are in compliance with the Americans with Disabilities Act.”

Under the settlement, the ACSO will pay $250,000 to the aggrieved individual. The settlement agreement also requires the ACSO to take remedial steps to bring itself into compliance with the ADA, including the appointment of an ADA Coordinator who is familiar with the ADA’s requirements; providing ADA training to its staff; adopting specific policies and procedures to ensure that auxiliary aids and services are provided promptly to individuals who are deaf or hard of hearing; procuring telecommunication devices usable by individuals who are deaf including videophones; providing hearing aid and cochlear implant processor batteries in the detention facility; ensuring that the ACSO responds promptly to disability related needs of its inmates; and adopting other policies consistent with the ADA.  Significantly, the Arlington County Sheriff took several steps that improve the ADA compliance of the ACDF even before finalizing the settlement agreement.

This matter was handled by Assistant U.S. Attorney Steven Gordon, who is the Civil Rights Enforcement Coordinator for the U.S. Attorney’s Office.

The Department of Justice has a number of publications available to assist law enforcement agencies in complying with the ADA on its web site, including “Communicating with People Who Are Deaf or Hard of Hearing:  ADA Guide for Law Enforcement Officers,” at http://www.ada.gov/lawenfcomm.pdf. For more information on the ADA and to access this publication, visit http://www.ada.gov or call the Justice Department’s toll-free ADA information Line at 800-514-0301 or 800-514-0383 (TDD).

The Arlington County Sheriff’s Office has amended its policies and practices to ensure full compliance with the Americans with Disabilities Act (ADA) in its treatment of inmates with disabilities in a settlement reached with the Department of Justice.

The agreement settles a lawsuit brought by Abreham Zemedagegehu, a deaf Ethiopian immigrant who alleged that he was not provided appropriate accommodations under the Americans with Disabilities Act and the Rehabilitation Act during a six-week stay in the County Detention Facility in 2014. The Department of Justice began an investigation in April 2015.

“The Arlington County Sheriff’s Office strives to treat all individuals committed to our detention facility with dignity and respect,” said Sheriff Beth Arthur. “These changes to our policies and practices will enable my staff to provide the means necessary for individuals with disabilities to benefit from all the programs and activities provided in our facility.”