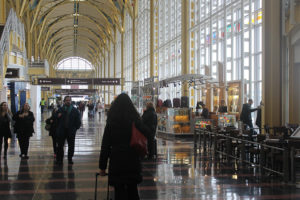 Airport workers at Reagan National and Dulles International airports may go on strike during the holiday season as part of an ongoing campaign for higher pay.

The union leading the charge, 32BJ SEIU, says that wheelchair attendants, skycaps, baggage handlers, checkpoint agents and cabin cleaners at the airports “earn as little as $6.75 an hour plus unreliable tips.”

The strike was authorized during a rally at National Airport today.

“The entire crowd marched for nearly a mile outside DCA to the Metropolitan Washington Airport Authority headquarters to demand that the board ensure contractors pay their workers $15 an hour,” the union said in a press release. “The workers were part of a nationwide Fight for $15 day of disruption, including strikes and protests at 330 locations and at 20 major airports nationwide.”

Among those participating in the rally were the workers, clergy, community groups and state delegate Alfonso Lopez.

“Given the vital role that airport workers play in keeping air travel running smoothly, safely, and on-time, it is disappointing that contracted workers at DCA are not paid a living wage for the critical work that they do,” Del. Lopez (D-Arlington) said in a statement. “In our nation’s capital, we can and should do better for those who help keep our economy moving. MWAA should act now to ensure that contractors are paid $15 an hour.”

Locally, the workers are employed by a private contractor, Huntleigh Corporation.

“We work very hard to ensure that travelers have a safe and clean airport, but we are ready to go on strike to ensure we can provide for our families,” said Aynalem Lale, a wheelchair dispatcher at Dulles. “If I made $15 an hour, I wouldn’t have to work two jobs and would not have to sleep at the airport between jobs.” …

Four decades ago, every job in an airport was a good, family-sustaining one. Men and women worked directly for the major airlines, which paid a living wage, provided pensions and health care and respected Americans’ right to stick together in a union. That’s no longer the case. Today, most Americans who work at airports are nonunion and are employed by subcontractors that pay low wages, without any benefits. Their jobs now represent the failures of a political and economic system geared towards the wealthy few and corporate profits at any cost.

Between 2002 and 2012 outsourcing of baggage porter jobs more than tripled, from 25 percent to 84 percent, while average hourly real wages across both directly-hired and outsourced workers declined by 45 percent, to $10.60/hour from more than $19/hour. Average weekly wages in the airport operations industry did not keep up with inflation, but instead fell by 14 percent from 1991 to 2011.

America’s airports themselves are also a symbol of the concerted effort to erode the ability of working people to improve their jobs. President Reagan fired and permanently replaced 11,000 striking air traffic controllers in 1981, paving the way for a decades-long march by corporations and elected officials to systematically dismantle Americans’ right to join together on the job. By zeroing in on airports Nov. 29, worker-class families are looking to transform a symbol of their decline into a powerful show of their renewed force.

All told, the Fight for $15 has led to wage hikes for 22 million underpaid workers, including more than 10 million who are on their way to $15/hour, by convincing everyone from voters to politicians to corporations to raise pay. The movement was credited as one of the reasons median income jumped last year by the highest percentage since the 1960s.