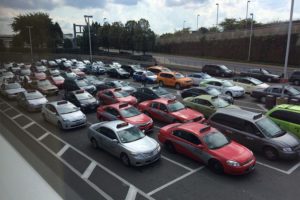 Traffic congestion at DCA is expected to be at its worst from 7-9 a.m. and 2-6 p.m. The peak holiday travel period is expected to last through Wednesday, Jan. 4.

Travelers using Ronald Reagan Washington National Airport this holiday season are advised of possible roadway congestion associated with record volumes of travelers flying at the airport. Drivers on airport roadways experienced delays during the 2016 Thanksgiving travel rush. Airport officials urge the public to plan ahead and consider alternatives to driving when making plans to use Reagan National between December 16, 2016, and January 4, 2017.

Suggested strategies and alternatives include:

Airport roadway congestion often peaks from 7 to 9 a.m. and from 2 to 6 p.m., coinciding with local rush hours and the busiest movement of airline passengers. Congestion often extends beyond these times on days immediately before and after major holidays.