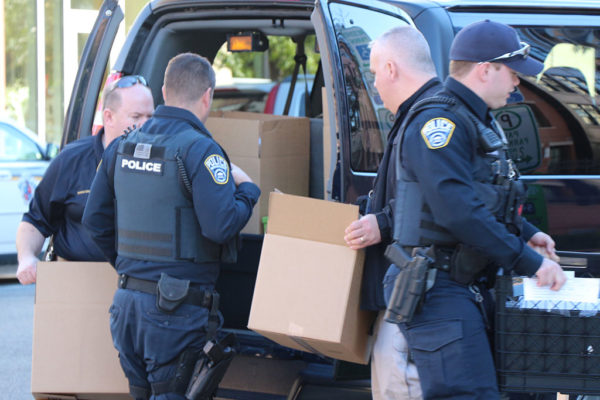 In Arlington, 2016 was a year that was filled with local stories that were tragic, triumphant or just plain weird.

5. Search Underway for Missing Elementary School Student (23,485 views)
A missing Taylor Elementary student was thankfully found unharmed, near the school, but not before police called in a helicopter and a bloodhound to help search for him. 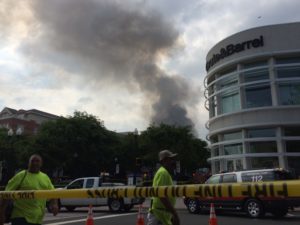 4. Major Electrical Fire at Market Common Clarendon (23,569 views)
When an underground electrical fire shoots flames and thick black smoke into the air at a shopping center in Arlington’s most prominent business district, it’s a big story. This story has lingered well beyond the flames being extinguished due to the extensive repairs that were needed and the disruption to Market Common residents and businesses.

3. Rosslyn’s Caffe Aficionado Shut Down After Police Raid (28,248 views)
Very few saw this one coming: a well-loved little independent cafe in Rosslyn, run by a pair of friendly middle-aged coffee aficionados, was allegedly ripping off customers by cloning their credit cards and using them to buy pricy gift cards. A person who might have seen it coming: one of our employees, who had her credit card used fraudulently after a visit to the cafe. 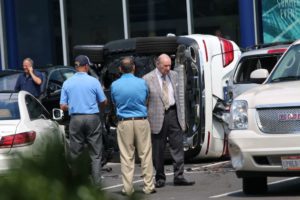 2. Test Driver Flips Mercedes In Dealership Parking Lot (32,493 views)
It’s still hard to understand how it could have happened, but just seconds into a test drive someone managed to flip a brand new Mercedes — while striking four other vehicles in the process — in the dealership’s parking lot in Ballston.

1. Swim Instructor’s Man Boobs Should Be Covered Around My Daughter (84,614 views)
“I took my daughter to this [swim] class yesterday. Unfortunately the male instructor’s breasts were flopping on the water and we felt extremely uncomfortable with her… in such close proximity to his intimate space.” Thus began an Arlington mom’s now-legendary complaint letter to the county’s Dept. of Parks and Recreation. The unusual letter would turn into an international “weird news” story after ARLnow.com first reported on it.

The most-viewed ARLnow post of all time remains this Morning Poll from 2015 about towing in Arlington. It has received nearly 200,000 views due to its role in another news story that started in Arlington before blowing up and spreading around the world: the Britt McHenry/Advanced Towing drama.

Earlier this month McHenry, an Arlington resident and ESPN reporter, wrote about the incident in Marie Claire magazine, discussing the lessons she has learned and its lingering effects on her.