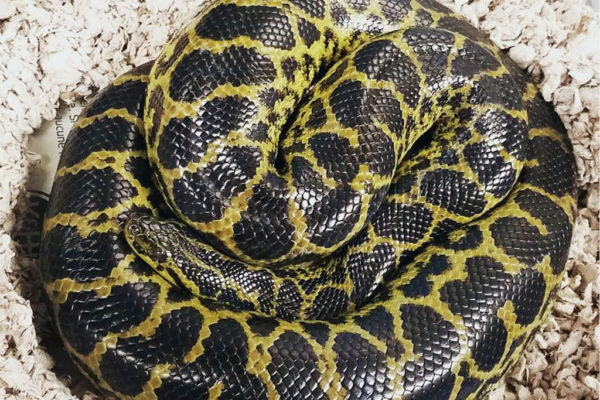 (Updated at 1:20 p.m.) An Arlington resident found a snake — a juvenile Yellow Anaconda, to be exact — in an apartment toilet last week.

The Animal Welfare League of Arlington recounted the surprise find in a Facebook post Tuesday afternoon. It happened, at an apartment building on 31st Street S. — in the Shirlington area.

“We do not know for certain how the snake got to this particular toilet but it is highly likely that it is someone’s pet that was either abandoned or escaped from an improperly shut vivarium,” said AWLA spokeswoman Chelsea Lindsey. “The snake (named Sir Hiss) would have then gone into the plumbing looking for food.”

No one was injured and the snake was safely removed from the apartment and taken to AWLA’s shelter. The organization says they have subsequently found a specialist to care for it.

“We highly encourage anyone thinking about having a snake as a pet to do extremely thorough research to determine whether they will be able to adequately care for their snake,” AWLA advised. “Fully grown, Yellow Anacondas can be up to 13 feet long and weigh more than 100 lbs.”

It’s never a dull day in Arlington County Animal Control! Last week, our Animal Control team received a call about a snake in the toilet of a local apartment. Officer Brenys White was able to safely remove the snake from the toilet and brought him back to the shelter. We were all in for a bit of a surprise — we were expecting him to be a wild snake or a ball python, but the snake is, in fact, a juvenile Yellow Anaconda!

Luckily, we were able to find a specialist who is familiar with his species and will be able to give him the care that he needs. We highly encourage anyone thinking about having a snake as a pet to do extremely thorough research to determine whether they will be able to adequately care for their snake. Fully grown, Yellow Anacondas can be up to 13ft long and weigh more than 100lbs. They need specialized care and housing, and while they are non-venomous, can be dangerous when they reach full size and are not well-socialized. Plus, no one likes being surprised by a lost and confused snake in their toilet! We are glad that in this circumstance we were able to rescue this snake, and that he did not make it out of the apartment complex and into the wild. Thank you to Officer Brenys for rescuing the snake and our specialist for giving him a new home!