In the cradle of our democracy and the Piedmont of Virginia, lies a winery that bears the name of the President-Elect. Trump Winery, formerly Kluge Estate Winery and Vineyard, sits in the same area that Thomas Jefferson once made wine. A region that has long had its own American Viticultural Area (AVA) designation as Monticello.

Donald Trump bought the winery in 2011 for $6.2 million — a bargain compared the $28 million that was owed on it. As part of that deal, Trump gained the rights to purchase Patricia Kluge’s famous estate, Albemarle House. It is now a luxury hotel for visitors of the winery.

Regardless of the reputation of its current owner or its previous one — Kluge was the divorcee of one-time Forbes’ richest man in the U.S., John Kluge — the winery has racked up accolades from publications like Wine Enthusiast and awards in local and national competitions. Its sparkling wines are its bread and butter, but there’s plenty to like about many of their varieties.

It probably shouldn’t surprise anyone that Trump wines are a hot commodity right now with the inauguration of its namesake in a week. A quick search on eBay reveals that there is a market for these wines with the name of the next president on them — in one post a case goes for $295. In fact, the wines are in such demand that they are mostly allocated to restaurants. 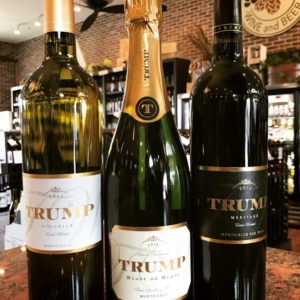 2010 Sparkling Blanc de Blanc
A classic example of a champagne-style chardonnay wine made in the U.S., the 2007-2009 vintages garnered 22 awards among them. Given that the winemaker has been with the winery since before the current owner took over, the 2010 vintage of this wine stands up well.

2015 Viognier
Named Virginia’s signature white grape in 2011, the Viognier grape is well suited to the climate of the Old Dominion. This wine is fruit-forward with distinct notes of banana and pear. It’s on the lighter side with a slight hit of sweetness.

2015 Meritage
Meritage is the name of blended wines that are made in the Bordeaux style, without having to be made in that region. The designation is controlled by the Meritage Association, which dictates the grapes to be used and suggests standards. This Meritage is a blend of merlot and cabernet franc grapes. The merlot grape dominates with big blackberry notes while the cabernet franc grape brings a hint of coffee grounds, which grows stronger as this wine warms in the glass. Bottled in 2015, this Trump Meritage is young and could use time to evolve.