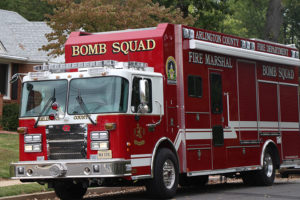 Arlington’s bomb squad is on scene at the Americana Hotel in Crystal City for a suspicious package investigation.

Police requested the bomb squad respond to the hotel, at 1400 Jefferson Davis Highway, just before 5:45 p.m. to investigate several suspicious packages. Additional fire department units were requested to the scene around 6 p.m.

Police were initially called to the hotel for a suspicious person.

“There was a report [that a] male subject was acting suspiciously,” Arlington County Police Department spokeswoman Ashley Savage told ARLnow.com. “He had left the scene prior to police arrival.”

The man “left some packages behind in a hotel room,” Savage said. “In an abundance of caution, the ACFD Bomb Squad is going to investigate the packages.”

Update at 7:20 p.m. — The scene has been cleared, police said via Twitter.

The package has been cleared by @ACFDPIO. Units will be returning to service. https://t.co/b7Mm3U5vs7