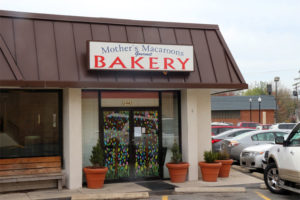 (Updated at 3:10 p.m.) A new purveyor of baked goods and caffeinated beverages is in the works at the Lee-Harrison Shopping Center in North Arlington.

The business, described only as a “coffee bakery,” is coming together in the former Mother’s Macaroons Bakery space at 2442 N. Harrison Street, according to building permits issued last month.

There has been recent construction activity in the space, a tipster told ARLnow.

Although information on the forthcoming cafe is sparse, a reader points out that a Facebook page for a coffee shop called “Chill Zone” says it’s “coming soon” to 2442 N. Harrison Street.

The website for the business does not appear to be active at this time, however.