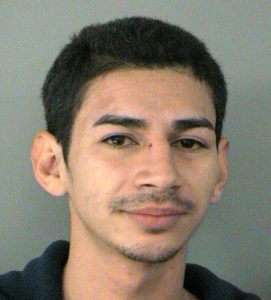 (Updated at 5:45 p.m.) A 28-year-old Arlington man has been charged with murder after police say he killed his roommate during a fight.

The charges follow the death investigation yesterday on 7th Road S. in the Arlington Mill neighborhood. It is Arlington’s first reported homicide of 2017.

Police say Heber Amaya-Gallo killed 55-year-old Michael Wiggins after a “verbal altercation between roommates became physical” in an apartment. Amaya-Gallo has been charged with first degree murder and is being held without bond.

As pointed out in the comments section, Amaya-Gallo has been implicated in at least three other violent crimes in Arlington over the past seven years.

Shortly after 2:00 p.m. on January 30, 2017, Arlington County Police officers were dispatched to the 5100 block of 7th Road S. for a death investigation. Arriving officers located 55-year-old Michael Wiggins of Arlington, VA deceased inside the residence. Three subjects were located on scene and transported to police headquarters where they were interviewed by detectives. Heber Amaya-Gallo, 28, of Arlington, VA was arrested and charged with first degree murder. He is being held in the Arlington County Detention Facility on no bond. The other two subjects were determined to be witnesses and have not been charged.

The investigation revealed that a verbal altercation between roommates became physical, resulting in the death of the victim. Official cause of death will be determined by the Medical Examiner’s Office.

Anyone with information about this investigation is asked to contact Detective S. Roeseler of the Arlington County Police Department’s Homicide/Robbery Unit at 703-228-4182 or [email protected]. Information may also be provided anonymously through the Arlington County Crime Solvers hotline at 1-866-411-TIPS (8477).