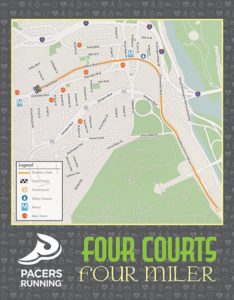 If you’re out and about in Courthouse and Rosslyn tomorrow morning, be prepared for some road closures and restricted parking.

Pacers is hosting its annual Four Courts Four Miler on Saturday. The race takes runners from the start at Ireland’s Four Courts along Wilson Boulevard and Jefferson Davis Highway before returning to the finish line outside the pub.

The starting gun will sound at 9 a.m.

Arlington police said they will close Wilson Boulevard from Courthouse Road to N. Rhodes Street from 6:30 to 11 a.m.

Police said street parking will be restricted, and vehicles parked illegally where there are temporary “No Parking” signs could be ticketed or towed.