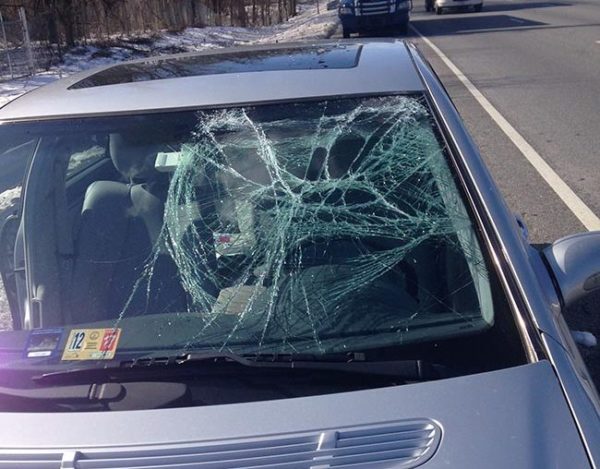 (Updated at 2:15 p.m.) The recent winter storm may be old news, but after several incidents in recent days drivers still need to be alert for chunks of ice flying off vehicles in front of them.

Arlington resident Meg Miller Rydzewski sent a photo of her husband’s car, which was struck by a chunk of ice that broke off a truck in front of him while driving northbound on I-95.

The ice hit the windshield and caused major damage, but Rydzewski said it could have been much worse.

“It’s estimated that if the force of impact had been 10 to 15 percent more, it would have gone through the windshield and might have killed him,” she wrote. “[It was] sudden and very scary.”

“He did get safely to the side of the highway but couldn’t see where he was going due to the shattered glass,” Rydzewski added. “Thankfully he was not hurt.”

AAA reported that flying ice caused injuries to three vehicle occupants along I-95 and the Beltway in Maryland on Wednesday. Maryland State Police said the victims “suffered eye injuries from spraying glass from windshields broken by ice from other vehicles.”

John Townsend, AAA Mid-Atlantic’s Manager of Public and Government Affairs, said drivers are responsible for clearing snow and ice from their cars before they leave home.

“Snow and ice flying off moving vehicles will cause other drivers to swerve to avoid it, and they can run off the road or swerve into another lane of traffic where other motorists are traveling, causing a deadly domino effect,” he said. “So before leaving your driveway or your curbside parking spot, and before you go, clear every inch of snow and ice accumulated on the exposed surfaces from your vehicle.”

There is no law in Virginia, Maryland or D.C. to punish motorists that do not remove snow from their vehicles before driving, according to AAA.

“A law is needed in Maryland, Virginia and the District to help protect drivers from sheets of snow and ice flying off from vehicles while they are driving down the road,” Townsend said. “After this epic snowstorm, it can be a matter of life or death if drivers fail to remove the snow and ice.”

AAA has a number of tips for people clearing snow from their cars. Drivers should never use hot water to melt ice on their cars, for instance; the organization recommends using de-icer spray for windows and mirrors in combination with a snow brush for the rest of the car. With the snow brush, drivers should work from the top of the vehicle on down, pulling snow towards you.

“It requires less effort and helps you avoid having to clear the same areas twice,” AAA says. “If the vehicle is an SUV or taller — grab a step stool to help access the roof.”

“Just as the removal of snow from sidewalks along your home and business is a responsibility of all citizens, removing snow and ice from vehicles should be the responsibility of every driver before it becomes dislodged while driving down the highways,” Townsend said. “It is the duty and debt we owe one another.”