(Updated 4:35 p.m.) Even with just one candidate declared for this year’s local elections, the Arlington GOP still believes it can make a splash.

“We’re certainly feeling very good after the results of last year’s election at the federal level, and we’re looking forward to this year at the state level elections,” Presswood said. “We’re looking forward to our statewide candidates doing quite well in a very strong field, and good competition for each slot, so we’re excited to see what happens in June in the primary.” 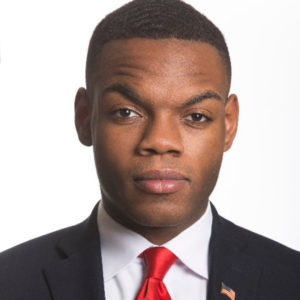 So far, only Adam Roosevelt has thrown his hat in the ring, challenging Del. Alfonso Lopez in the 49th District of the House of Delegates. Roosevelt’s campaign is focused on education, growing small business, supporting the military and local law enforcement and enhancing cybersecurity.

For his part, Lopez filed for re-election earlier this month after serving the district for six years. In his announcement, Lopez said he is running “because we deserve an open and welcoming Commonwealth that protects everyone and creates economic opportunity for all.”

Beyond Roosevelt, the local GOP has tried to recruit candidates for the County Board, School Board and other House of Delegates seats, to no avail as yet.

So far, Arlington’s three other House of Delegates members — all Democrats — are unopposed, while there are four Democratic candidates vying for the retiring chairman Jay Fisette’s seat as well as independent Audrey Clement.

The local Republicans have not run a County Board candidate since 2012, when Mark Kelly and Matt Wavro both lost to Libby Garvey. Board Member John Vihstadt serves as an independent despite having previously identified as a Republican.

Presswood said he takes the time at every monthly meeting to encourage newcomers to step forward. Mike Lane was the last Republican to sit on the County Board after he won a special election in 1999.

“Typically, people who want to run contact us, and that’s how we’ve been working it,” he said. “We certainly are, as we notice people getting more involved in the committee, saying, ‘Hey, you should run.’ We’ve done that, but as far as this cycle goes we haven’t seen anyone really step forward yet. But hopefully they will soon.”

If candidates do step forward, Presswood said, the local party would likely hold either a so-called “firehouse primary” or a mass meeting to determine nominees.

Read more →
More Stories
Morning NotesLetter to the Editor: Walking the Walk on the Buck Property