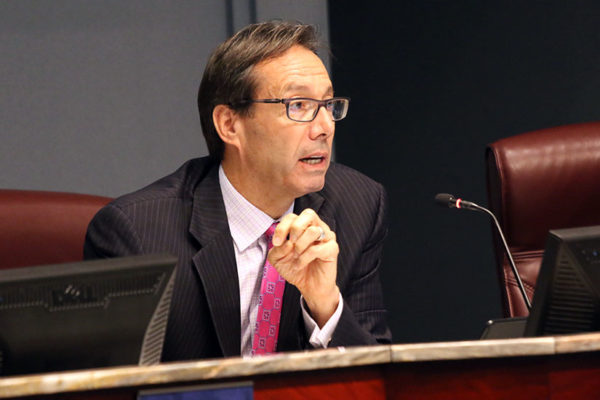 (Updated at 1:30 p.m.) Arlington County Board Chair Jay Fisette will not seek re-election this year, capping two decades of service on the Board.

Fisette, who first took office in 1998, is currently the longest-serving Board member. In a phone interview today, he said he has been weighing for months whether to run for another term.

“It’s really a complete honor and a privilege” to serve on the Board, Fisette said. “I still love the place, I’m just ready for a new challenge… a new way of working on the progressive values that we’ve embraced and that I’ve championed here in Arlington, that are at some level threatened at this moment.”

Though he has not decided what exactly to do next, Fisette said it will not be in elected office.

Fisette said he is especially proud of the Board’s long-term vision for Arlington — a “broad commitment to policies regarding the long-term sustainability of the community,” like transportation, housing, land use and the environment.

That was possible, Fisette said, because he “had the luxury, during most of my time here,” to make decisions based on community and professional staff input, and based on what he felt was best for the county.

“I worked really hard to treat people with respect and be fair,” said Fisette. “I could vote my conscience and best judgment with very little [consideration for] political or short term expediency.”

Fisette added that he hopes his successor continues to “stretch and aspire” without becoming “too political at the expense of good policy,” while at the same time emphasizing community engagement and “building toward a consensus.”

So far no candidates have filed to run in the upcoming Democratic County Board caucus, according to the Sun Gazette. With Fisette’s announcement today, a number of Democrats are now expected to throw their hats in the ring for the May 11 and 13 caucus. Whoever wins will face perennial independent candidate Audrey Clement in November.

In an Arlington County press release today (below), Fisette said that as an openly gay man he likely would not have been embraced by many communities like he was in Arlington when he ran for Board in 1997. He was Virginia’s first openly gay elected official.

Arlington County Board Chair Jay Fisette said today he has decided not to run for re-election to the Board this year.

“I just returned from a trip abroad, where I gave this a lot of thought,” Fisette said. “I have decided that it’s time to find a new platform and seek new ways of protecting and advancing some of the progressive values that are so important to me, values we have championed here in Arlington that are threatened by the current administration. I will not seek a sixth term on the County Board. Stay tuned.”

His nearly 20 years of service on the Board “have been an honor and a privilege,” Fisette said. “I have often said that I am not sure I would have run for office in many other places, yet Arlington always felt like a great fit for me. This community has such a strong tradition of policy-based good government where community involvement is encouraged and matters.”

Arlington, he said, “embraced me as a gay man long before such an endorsement could be presumed, long before it became the norm.” He has fought hard, Fisette said, to ensure Arlington has remained an inclusive and welcoming community.

Fisette, first elected to the Board in 1998, said he has found it “exhilarating to work with visionary Board members, some of the most talented professional staff anywhere, and a deeply civic-minded community to transform Arlington in a way that has made it one of our nation’s most dynamic, desirable places to live,” Fisette said.

“It has been gratifying to help create a vision and then work to actually bring that vision to life – we have proven that you can be both fiscally responsible and progressive. I hope that Arlington continues to aspire and inspire.”

Fisette cited his decades of work on long-term sustainability issues, including smart growth urban planning, strong environmental policies including adoption of the Community Energy Plan, a multi-layered transportation system that includes Metrorail, bus and Capital Bikeshare, and a robust local affordable housing program, as among the accomplishments of which he is most proud.

“I believe in the power of collaboration and regionalism to make a difference,” he said.

“I have thoroughly enjoyed this work and will continue to do so through December,” he said. “And then others will continue the important work of planning and serving our community. Part of the challenge, and the satisfaction that comes from this job, is that the work is never done – that our community can and will always get better.”

Fisette has lived in Arlington since 1983 and has owned a home in Ashton Heights, with his husband, Bob Rosen, since 1987. The couple will stay in Arlington, he said. “We love Arlington and it will always be our home.”