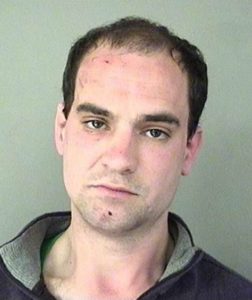 An Arlington County Police officer was stabbed in the neck and saved from further injury by his ballistic vest during a confrontation with a man suffering an apparent mental health crisis.

The incident happened on the 800 block of N. Irving Street, two blocks from Clarendon.

Crisis Intervention Team trained officers were serving an emergency custody order on a 28-year-old resident around 7 a.m. Wednesday morning, according to an ACPD crime report, when the man pulled out a knife and tried to tried to stab officers and take their weapons.

The officers, who are trained in non-lethal ways to deal with combative suspects, used a Taser to subdue him and take him into custody.

“One officer suffered a non-life threatening wound to the neck and numerous strikes to the body were obstructed by his ballistic vest,” according to the crime report, below.

MALICIOUS WOUNDING ON LAW ENFORCEMENT, 2017-03220058, 800 block of N. Irving Street. At approximately 6:57 a.m. on March 22, officers were dispatched to the area to serve an emergency custody order on a subject. As the Crisis Intervention Trained officers made contact with the subject inside the residence, he advanced towards them, reached behind his back and produced a knife. The officers were able to block the initial strike and take the subject to the ground where he continued to be combative and repeatedly attempted to disarm the officers. A taser was deployed and the subject was taken into custody. One officer suffered a non-life threatening wound to the neck and numerous strikes to the body were obstructed by his ballistic vest. John Fitzgerald, 28, of Arlington, VA was arrested and charged with malicious wounding on law enforcement, assault and battery on police and attempt to disarm an officer.