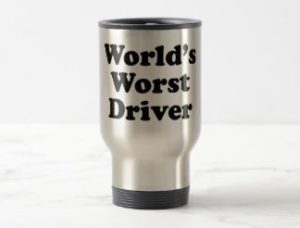 A Falls Church man is facing charges after he threw a coffee mug at another driver during a road rage incident, according to Arlington County Police.

MISSILE INTO OCCUPIED VEHICLE, 2017-04020237, 500 block of 12th Street S. At approximately 6:35 p.m. on April 2, police were dispatched to the report of a dispute between drivers. Upon investigation it was determined that the suspect allegedly threw a coffee mug at the victim after the victim cut him off. The coffee mug struck the vehicle and no injuries were reported. Ghassan Odeh, 33, of Falls Church, VA was arrested and charged with Throwing a Missile into an Occupied Vehicle and misdemeanor Damage to Personal Property. He was released on an unsecured bond.

The rest of the past week’s crime report highlights, including some that we’ve already reported, after the jump.

ASSAULT & BATTERY ON POLICE, 2017-04030296, 4700 block of Lee Highway. At approximately 9:52 p.m. on April 3, police were dispatched to the report of a disorderly subject inside a restaurant. The responding officers escorted the subject outside and as they were conducting the investigation, he allegedly became combative and assaulted multiple officers. Once in custody, the subject bit the finger of an Arlington County Fire Department Medic attempting to evaluate him for injuries. Jorge Luis Quintero-Amaya, 28, of Temple Hills, MD was arrested and charged with Assault & Battery on Law Enforcement (x5), Assault on Medical Personal, Resisting Arrest, Obstruction of Justice and Failure to ID. He was held on no bond.

BURGLARY, 2017-04010047, 700 block of S. Highland Street. At approximately 2:04 a.m. on April 1, police were dispatched for an active alarm. Responding officers cleared the building and did not locate anyone inside. It was unclear at the time if any items were missing. The investigation is ongoing.

UNLAWFUL ENTRY, 2017-04010102, 900 block of N. Lincoln Street. At approximately 9:27 a.m. on April 1, police responded to the report of an unlawful entry. The female victim reported a known subject entered her residence without permission. Nothing was reported missing.

BURGLARY, 2017-03280284, 6700 block of Washington Boulevard. At approximately 7:50 p.m. on March 28, police responded to the report of a larceny. An unknown subject entered a residence and stole the female victim’s purse. The suspect is described as a white male with brown hair wearing a black jacket, black pants, black and white shoes and a navy backpack. The investigation is ongoing.

BURGLARY, 2017-03290081, 4000 block of 8th Street S. At approximately 8:20 a.m. on March 29, a male victim heard noise originating from the lower level of a residence. A short time later, an unknown suspect opened the door of the victim’s bedroom before fleeing the scene. No items appeared missing. The suspect is described as approximately 6’0″ tall wearing a puffy dark jacket.