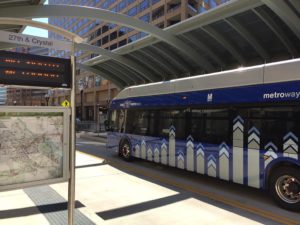 One year after it began service through Arlington, the Transitway appears to have picked up steam, and thousands of riders each day.

Metroway operates between the Braddock Road and Pentagon City Metro stations via U.S. Route 1 through Potomac Yard and Crystal Drive in Crystal City. It opened last April after collaboration with the City of Alexandria but ran into construction delays and cost challenges.

According to statistics provided by the county’s department of environmental services, there have been an average of 3,805 boardings and disembarkings at all stations in Arlington every weekday.

County staff said there have been an average of 474 weekday boardings and disembarkings at the S. Glebe Road station, just north of Arlington’s border with Alexandria. The station has the most riders in Arlington by that metric.

County staff estimate that riders starting their journeys at S. Glebe Road saved two-and-a-half minutes on their journeys with the dedicated bus lanes, compared to when they rode the Metrobus’ 9S service, which was replaced.