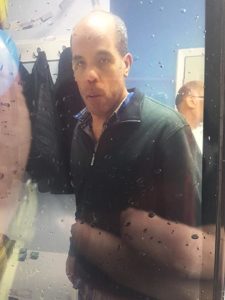 Update at 4:35 p.m. — The man has been found, according to scanner traffic.

Earlier: Arlington police are searching for a man who went missing from the Fashion Centre at Pentagon City earlier this afternoon.

Paul Lowe, 41, was last seen at the mall at around 2 p.m. According to police, he is described as a light skinned black male, approximately 6-foot-2 with a slim build, bald with a small goatee. He was last seen wearing a blue plaid shirt with blue jeans. Lowe is described as having the mental capacity of a 10-year-old.

According to scanner traffic, Lowe was ejected from the mall by security guards, but they did not realize he has mental health issues. A friend who was with him reportedly said that while he likely does not have the ability to navigate Metro by himself, he is capable of operating crosswalks.

Police are currently scouring the mall and the surrounding area, including the Pentagon City Metro station, Pentagon Centre and Pentagon Row. K-9 units are on scene to assist with the search.

Anyone with information on Lowe’s whereabouts is asked to contact the Arlington County Police Department immediately at 703-558-2222.

END_OF_DOCUMENT_TOKEN_TO_BE_REPLACED

More Stories
ACFD Investigating Intentionally-Set Fire at Arlington ChurchReady Arlington: What is the Deadliest Natural Hazard in the United States?