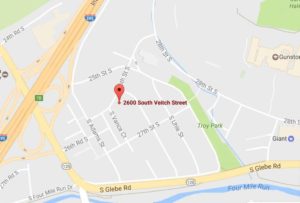 Arlington County firefighters are on scene of an apartment fire in the Long Bridge Creek neighborhood.

The fire was reported in the bedroom of an apartment on the 2600 block of S. Veitch Street around 8:45 a.m. It was extinguished within 10 minutes of firefighters arriving on scene, before it could spread to other apartments.

No injuries were reported. Scanner traffic suggests the building’s sprinkler system was activated by the fire.

The fire marshal’s office is now investigating the cause of the blaze.

#Breaking units on scene of an apt fire at 2600 block of S Veitch St, all occupants reported out. Road closures in the area pic.twitter.com/Z4OkYNDLs5