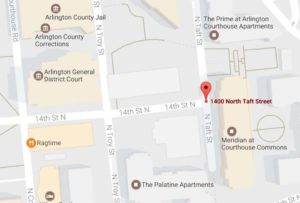 A man arrested and charged with exposing himself Friday night only had to make a very short trip to jail.

The incident happened just after 11:30 p.m. Police say a 27-year-old Arlington resident exposed his genitals to a woman on the 1400 block of N. Taft Street in Courthouse.

That’s just a block away from Arlington County Police headquarters and the county detention facility. The man was soon arrested and charged with indecent exposure.

INDECENT EXPOSURE, 2017-05190357, 1400 block of N. Taft Street. At approximately 11:36 p.m. on May 19, officers responded to the report of an indecent exposure that had just occurred. Upon arrival, it was determined a male subject allegedly exposed his genitals to a female victim. Airimis Arutiunian, 27, of Arlington VA, was arrested and charged with indecent exposure. He was held on a secured bond.