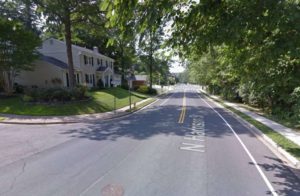 Arlington County Police are looking for a man who tried to lure a boy into his car in the Yorktown neighborhood.

The incident happened around 8 a.m. this past Thursday, on the 3000 block of N. Harrison Street, not far from Yorktown High School. Police say a middle-aged man in a silver car asked the boy where he was going and whether he wanted a ride.

ENTICEMENT(Late), 2017-05250276, 3000 block of N. Harrison Street. At approximately 9:15 p.m. on May 25, police were dispatched to the report of an enticement. The investigation revealed that at approximately 8:00 a.m. on May 25, a juvenile male was walking in the area when an adult male subject in a silver four-door sedan pulled alongside him. The subject asked the juvenile where he was going and if he wanted a ride. When the juvenile responded no, the subject drove off in an unknown direction. The subject is described as a white male between 40-60 years old with gray hair. The investigation is ongoing.