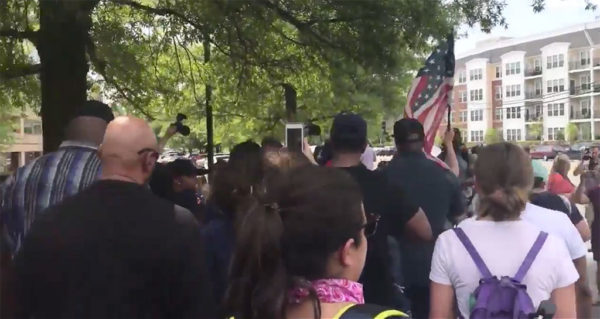 (Updated at 11:35 a.m.) A march from the National Rifle Association in Fairfax to the Dept. of Justice in D.C. is expected to make its way through Arlington tonight.

A rally for the Women’s March from #NRA2DOJ got underway Friday morning outside of NRA headquarters and around 11:30 a.m. marchers embarked on their 18 mile journey. The march is intended to “denounce the false and intimidating rhetoric of the NRA and send a clear message that our movement will proudly and bravely continue to strive for the respect of the civil and human rights of all people.”

The march is expected to reach Arlington in the late afternoon or early evening. It will head down Lee Highway before entering the District via Rosslyn and the Key Bridge.

“Arlington County Police will be on scene and will monitor for any impacts,” said ACPD spokeswoman Ashley Savage.

The county’s Office of Emergency Management, however, said “there is a potential for traffic disruption” along the march route so drivers should “consider alternate routes.”

There are no planned road closures in Arlington County. It is anticipated that the march will remain on sidewalks until it reaches District.