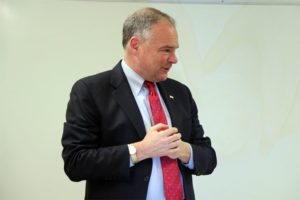 Local representatives in the U.S. Senate and U.S. House of Representatives sharply criticized the Senate’s vote Tuesday (July 25) to begin debate on repealing the Affordable Care Act, known as Obamacare.

The Senate voted 51-50 — with Vice President Mike Pence called on as a tie-breaker vote — to open debate on repeal, with three possible plans to be discussed in the coming days.

Those plans are the Senate’s own plan to repeal and replace Obamacare; a 2015 House bill that would have repealed the law; and a bill that passed the House earlier this year.

“As one of my colleagues has said, not a single one of us came to the United States Senate to hurt people, but that is exactly what Republicans have set in motion with today’s forced vote on a secret bill. For many of my constituents in Virginia and millions of people across America, this bill likely means losing insurance or paying much more for health care.

“I spent Friday volunteering at the RAM Clinic in Wise County, where thousands of people had traveled far from their homes–many of them sleeping in their cars and outside in the heat–to get care. The magnitude of the need was heartbreaking, and the message from these families was clear: ‘help us, don’t hurt us.’ As the wealthiest and most compassionate nation in the world, we must make our health care system better, not worse, for these families. We have to do our jobs to protect the health care of the kids whose parents who have been writing to me and asking Congress to stop this heartless bill.

“This is about what’s right and wrong. This is about who we are as Senators. This is about what thinking, feeling, breathing, believing human beings in positions of leadership will do to help people, not hurt them. Americans–healthy and sick–need us to get this right, but Republican Senators got it wrong with today’s vote. In the coming days, I hope we’ll change course, move to a more open process, and get back to helping people.”

“Today’s vote will have very real and disastrous consequences for millions of Americans. The only question is how many people will be harmed, since Senate Republicans voted to move forward on a bill no one has yet seen but which we already know will raise costs and kick millions off their health insurance, including millions of children, elderly and disabled Americans who depend on Medicaid.

“There is still time for reasonable Republican senators to abandon this partisan process. It is long past time for Republicans to sit down with Democrats and work on a bipartisan solution that actually improves our healthcare system.”

U.S. Rep. Don Beyer (D), who represents Arlington in the House, had not released a written statement as of the time of writing. On Twitter, Beyer also criticized the vote, and the uncertainty surrounding the Senate’s next steps.

This is really happening. No GOP Senators know what they are about to vote on.

They really do have to pass it to find out what's in it. https://t.co/NbfRxd8Bei

All those complaints about the secrecy, partisanship, and broken order.. they still voted yes. https://t.co/Enw6pUdcSt

END_OF_DOCUMENT_TOKEN_TO_BE_REPLACED

More Stories
More Details About New &pizza in BallstonGrowing Up in Arlington: A Perspective