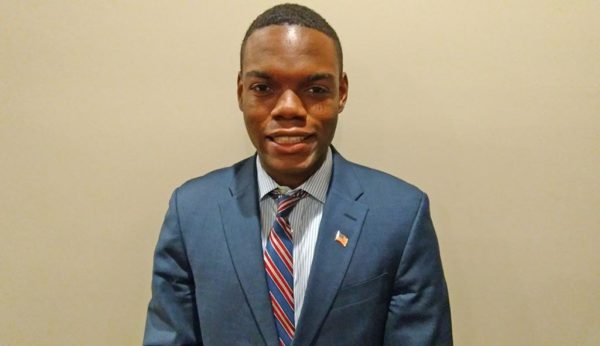 Political newcomer Adam Roosevelt said he knew at the age of 13 years old that he wanted to run for the Virginia House of Delegates.

He grew up in Norfolk, Va., in what he described as a “ghetto” neighborhood that struggled with gangs and poverty.

But at 13, he was inspired after meeting a local woman named Mrs. Bell, who spent her life donating money to the needy and taking trips to Africa to feed the hungry.

The 25-year-old began by serving in the U.S. Army, which included two tours in Afghanistan and a stint at NATO. He filed to run for the 49th District of the House of Delegates earlier this year on a platform he calls “Let’s Secure Virginia,” focusing on education, transportation, small business and veterans’ affairs.

The Pentagon City resident faces the task of trying to unseat Del. Alfonso Lopez (D), a three-term incumbent who also serves as Minority Whip for the Democratic caucus. The district includes neighborhoods along Columbia Pike and near the Pentagon, as well as parts of Bailey’s Crossroads and Seven Corners in Fairfax County.

If elected, Roosevelt said one of his major priorities would be improving education in the district. With a focus on science, technology, engineering and math (STEM), as well as encouraging more students to study medicine, he said he wants to help young people be competitive in the job market.

And to help do that, Roosevelt said he would be open to adding more charter schools and vouchers, which would provide government money redeemable for tuition fees at a non-public school. He said the growth of such schools helps encourage competition.

“It forces our teachers to have to get more certifications and get more education, and we’re going to start providing a system there that by competitive nature allows for higher quality and it allows our parents to have the opportunity to say, ‘I want my son to go to that school, I like the curriculum, that school’s doing very well,'” Roosevelt said. “It forces the other schools to compete now, and I think that’s healthy.”

Roosevelt now works as a contractor in cybersecurity and intelligence for the Department of Homeland Security. He said that helping small businesses grow is another priority, by reducing the corporate tax rate from 6 percent to 4 percent for small businesses and working with Arlington County to make the Business, Professional and Occupational License (BPOL) tax less burdensome.

Also on Roosevelt’s agenda is improving transportation, which he said should be invested in wisely, and be made as reliable as possible.

“I’m big on cutting down on waste, fraud and abuse,” Roosevelt said. “Our contracting processes are causing us to purchase things that are too much money, like $1 million for a bus stop. We could have bought a few bus stops, we could have had three full-time employees under a small business and we could have had some more labor there.”

Still a U.S. Army Reservist, Roosevelt said he wants to ensure returning service personnel and their families are well taken care of. That would include more education for military spouses, as well as helping ease those who have served into civilian life with job training and opportunities.

“I want to expand the portfolio of education for our spouses that are staying behind, and I want to give them a path to success while their husbands or wives are away,” Roosevelt said. “And when the husband or wife returns homes, I want them to feel like Virginia is home for them and they are received by a community that has programs there to help them back and reintegrate into normal life.”

Lopez has a big fundraising advantage, with nearly than $25,000 on hand at the end of the latest filing period, compared to just over $1,000 for Roosevelt.

Arlington GOP chair Jim Presswood said that while the odds may be long for the only local Republican candidate on the ballot this fall, Roosevelt’s energy and ability to sell his agenda to voters will matter more than money.

“I think if you have a candidate who is energetic, who is out there, who is going to be knocking on a lot of doors and talking to a lot of people, I think money makes less of a difference,” Presswood said.

Roosevelt said if elected, he would be determined to fight for issues that concern his constituents, and even rail against party leadership in Richmond to pursue those goals.

“It has to be a bipartisan focus,” he said. “So what [voters] can expect from me is to champion their voices to the General Assembly, and if need be, I will take on any party for that matter if they stand in the way of the people. This is not about a political party. This is about a community of people who need hope and need help and they need it now.”

Editor’s note: a piece on Lopez’s re-election campaign will follow in the coming weeks.