“Modern Times is proof that a start-up brewery can compete and win in the craft beer market without selling out, all the while taking outstanding care of our employees and rewarding our investors.” — Jacob McKean, Modern Times founder, CEO and majority owner.

A healthy dose of idealism peppers the enthusiastic blog post announcing the 30 percent stake that San Diego’s Modern Times Beer granted its employees. It’s not surprising when you consider where the company got its name and the names of most of its beers — utopias, both real and fictional. “Modern Times” refers to a failed utopian society that was built in 1850 on Long Island, NY — not the Charlie Chaplin classic as I had supposed.

You can read a fantastic article about the employee stock ownership plan (ESOP) over at Brewbound, but here’s another quote from McKean about the importance of the decision: “It ticked every box for us: achieving an outstanding return for our investors, maintaining our independence, rewarding the employees who have made our success possible, enhancing the collaborative culture that’s so vital to the company, and creating a sustainable ownership structure that will replace me when I’m ready to move on.”

Started in 2013 by former Stone Brewing Company alumnus Jacob McKean, Modern Times has grown enough to distribute to Virginia, California, Nevada and Hawaii. Since late June, the much loved San Diego brewery has been available at Dominion Wine & Beer.

Their flagship beer may be the Belgian style farmhouse ale, Lomaland, but they are not a Belgian style brewery. They claim to specialize in “aroma-driven, complex, flavorful, sessionish beers” — the four beers I’m sharing below certainly — mostly — fall into that category. 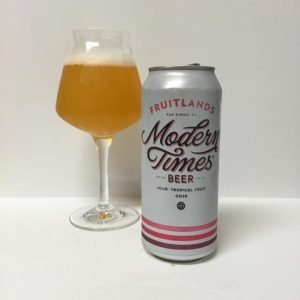 Billed as a tropical fruit gose, Fruitlands is brewed with guava and passion fruit. It’s no surprise, then, that the aroma is all passion fruit. Flavor-wise, mild tartness and malty cracker steps to the fore — the fruit in the aroma ducks out of the way. Though carrying the tell-tale lemony sourness of a kettle-soured beer, Fruitlands is relatively mild. It’s light and exceptionally drinkable. Enjoy them on a hot, humid Virginia summer afternoon. 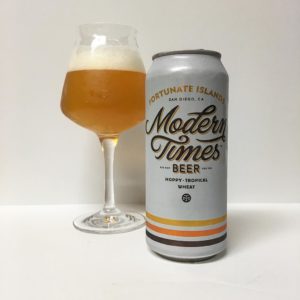 Basically an IPA with wheat in the grain bill, Fortunate Islands is dry-hopped with Citra and Amarillo hops. The result is a crisp beer with aromatics of juniper and fresh laundry. Pine needles, peppercorns, sweetness and mild tropical fruits burst through in the sip. At 5%, this beer is super crushable — it’s light bodied and full of flavor. 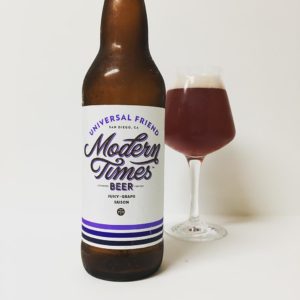 Brewed using Modern Times’ proprietary Belgian yeast blend Lomaland and Pinot Noir grapes, Universal Friend is an adventurous spin on their flagship saison. Inhaling deeply invokes a delightful memory of Welch’s grape soda. The flavors are a bit more complex, though. Grape flesh emerges first, followed by juicy tartness with cloves. As this beer warms, the fruit hides behind the spice — it is a saison after all. Many American saisons tend to have an astringent bite, but Modern Times’ interpretation of the style is smooth with a hint of tartness. 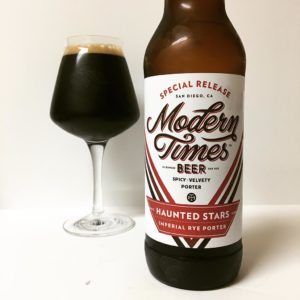 Holy Cow! First, imperial porters walk a fine line between black IPAs and stouts. To me, the difference is in the lack of hops for the former and the lighter mouthfeel than the latter. All that’s just a technicality. You want to call your black beer an imperial porter and not a stout? If it’s tasty, I don’t care. Haunted Stars happens to be super delicious. Full of vanilla and wonderfully bitter black malt with a bite like dark chocolate, this beer makes a perfect dessert beer.