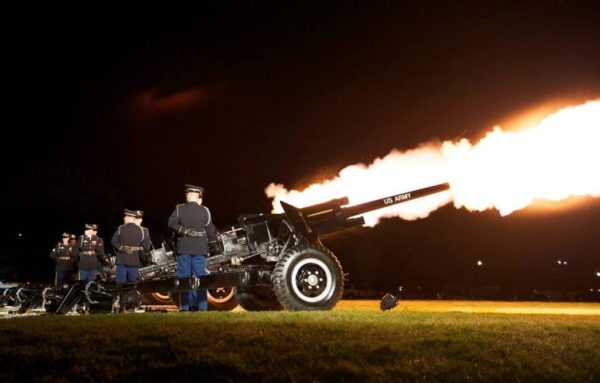 Those near Joint Base Fort Myer-Henderson Hall next weekend can expect to hear live cannon fire during the U.S. Army Band’s annual 1812 Overture summer concert.

The free concert is scheduled for 8 p.m. on Saturday, August 19 at Summerall Field (247 Sheridan Ave) on the base. If it rains, it will be moved to across the street to Conmy Hall (239 Sheridan Ave).

The climax of the evening will be live cannon fire provided by the Presidential Salute Battery of the 3rd Infantry Regiment (The Old Guard) during a playing of Tchaikovsky’s 1812 Overture.

Advance tickets are not required, and bleacher seating is available on a first-come, first-served basis. Food is allowed but alcohol, glass containers and coolers are not. All bags will be searched.

Cars and pedestrians can enter the base through the Hatfield Gate (off Washington Blvd and 2nd Street S.). The Henry Gate (off Arlington Blvd) will be open for pedestrians only from 6-10:30 p.m., while cyclists can enter at either gate. Valid photo ID is required for attendees aged 18 or over.

END_OF_DOCUMENT_TOKEN_TO_BE_REPLACED

More Stories
Morning Poll: How Worried Are You About Nuclear Annihilation?WWBG: Johnny Appleseed and the Nectar of the Gods