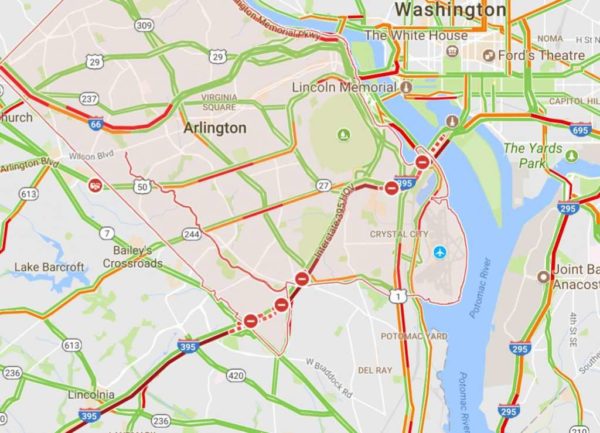 Update at 3:25 p.m. — One person has died as a result of the crash, which involved two construction vehicles, according to an updated statement from Virginia State Police.

At 2:21 a.m., Tuesday (Aug. 22), Virginia State Police Trooper A.J. Santiago responded to a fatal crash in the southbound Express Lanes of I-395 near Exit 10C in Arlington County.

At the time of the crash, the Express Lanes were closed to the public because of an active highway work zone for pavement repairs. A dump truck had just entered the work zone and was traveling south to deliver its load of paving material. Another work zone vehicle, a pickup truck, was traveling north in the closed southbound Express Lanes and as it came through a bend in the highway collided head-on with the southbound dump truck.

The driver of the dump truck was not injured in the crash.

The Virginia State Police Fairfax Division Crash Reconstruction Team responded to the scene and is assisting with the ongoing crash investigation.

Earlier: The inbound HOV lanes of I-395 have been closed during the morning rush hour due to a crash investigation.

The investigation is taking place just before the 14th Street Bridge, following an early morning crash involving a pickup truck and a dump truck. Three vehicle occupants were transported to the trauma center at George Washington University Hospital.

Police typically conduct accident investigations when a victim of a crash has life-threatening injuries.

The closure of the HOV lanes is causing major backups on the entire stretch of northbound I-395, particularly in Arlington. One driver, on Twitter, reported a 1 hour, 45 minute commute from Woodbridge.

Early this morning ACFD & @AlexandriaVAFD responded to I-395 HOV lanes near Exit 8B for an #entrapment. 3 patients taken to GW hospital. pic.twitter.com/nCixmeRpLZ

Here's a pic of it! pic.twitter.com/5AlvJontYB

14th St NB is empty because no one can get in from Virginia. 1 hour 45 minutes from Woodbridge. #vatraffic @WTOPtraffic pic.twitter.com/FYy7VVvoXw

END_OF_DOCUMENT_TOKEN_TO_BE_REPLACED

More Stories
Deal of the Day: 50% Off SIPtember Events in Crystal CityMorning Notes