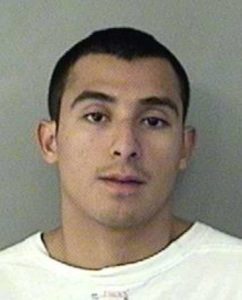 A 22-year-old Falls Church man has been arrested and charged with assaulting two women along the Custis Trail.

Police say Marvin Velasquez touched a woman walking the trail inappropriately on Wednesday afternoon. He also grabbed a second woman and then exposed himself to her, according to a news release.

The incidents happened along the trail near where it crosses Spout Run Parkway. Police are now trying to figure out whether there may be additional victims.

The Arlington County Police Department’s Special Victims Unit are seeking additional witnesses or victims related to the following matter. A suspect has been charged in an incident involving female victims in the area of the Custis Trail. Marvin Sosa Velasquez, 22, of Falls Church, VA was arrested and charged with indecent exposure and two counts of assault and battery. The suspect was held on no bond in the Arlington County Detention Facility.

At approximately 4:37 p.m. on August 23, police responded to the 1900 block of N. Calvert Street for the report of an assault and battery. Upon arrival, it was determined a female victim walking on the bike trail was touched inappropriately by a male suspect. While investigating the incident, officers located a second female victim who reported the same male suspect grabbed her around the waist. The female victim was able to free herself from the suspect. The suspect then pulled down his pants and exposed his genitals to the victim. Responding officers canvassed the area and located a suspect matching the victim’s descriptions in the 3300 block of Lee Highway.

Investigators believe there may be additional victims. Anyone who had previous contact with the suspect is asked to call Detective J. McGrath of the Special Victim’s Unit at 703-228-4244 or [email protected]  Information may also be provided anonymously through the Arlington County Crime Solvers hotline at 1-866-411-TIPS (8477).