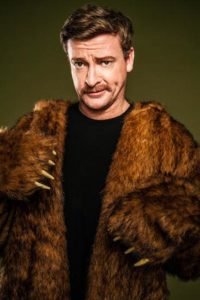 With fall just around the corner, the Arlington Cinema & Drafthouse (2903 Columbia Pike) has added some big names to its live comedy lineup.

On Friday, September 22 and Saturday, September 23, Aasif Mandvi will perform a “New Material Night,” with each show ending in a question-and-answer session. Mandvi was a correspondent on Comedy Central’s Daily Show with Jon Stewart, and also wrote, produced and starred in “The Brink” on HBO.

And on December 1 and 2, Rhys Darby of the BBC and HBO’s “Flight of the Conchords” comedy will perform his own standup show. Darby, who has also produced mockumentaries and appeared on TV shows like “Modern Family,” “How I Met Your Mother” and the Late Show with David Letterman, as well as movies.

Those are in addition to a lineup that already includes the likes of comedy legend Jon Lovitz and former MTV stars Pauly Shore and Steve-O.

The Drafthouse has made a series of changes, including new seating, a new summer focus on first-run films, and opening a new Mexican restaurant in the former “green room” bar space.