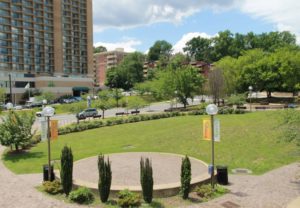 A march from Charlottesville to D.C. against the “toxic ideology of white supremacy in our nation” is set to reach Arlington County this afternoon (Wednesday) before heading onto its final leg.

The March to Confront White Supremacy was organized by local religious leaders and social justice advocates. It began in Charlottesville on August 28 , following the death of Heather Heyer while protesting a white supremacist rally in the city.

Marchers are set to arrive at Gateway Park (1300 Lee Highway) in Rosslyn at 3 p.m. today, then leave for the Dr. Martin Luther King Jr. Memorial for a 4 p.m. rally.

Arlington police said there are no planned road closures to accommodate the march, though ACPD and Virginia State Police will monitor it. Organizers said the march has attracted nearly 1,000 people for its final stages from Fairfax into D.C.

Since beginning in Charlottesville, organizers said they have overcome “inclement weather and threats to stop the march from state police,” on a route that took them 118 miles through “the largely white and rural Virginia countryside.” Today, the march is encountering rainy weather as it arrives at its destination.