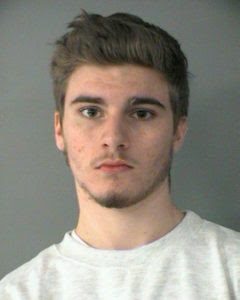 An Arlington man received a 32-year prison sentence for the fatal stabbing of his father last year on 3rd Street S.

He was sentenced to 50 years in prison with 23 suspended for a charge of first degree murder and five years for a charge of stabbing in the commission of a felony. The two sentences will run consecutively.

Adams stabbed his father on April 1, 2016 around 8 p.m. Officers responded to the 100 block of S. Glebe Road, and found both men suffering from stab wounds.

Dennis Adams later died from his injuries in the hospital, while Maxwell Adams suffered minor injuries.

Police said that initially, Adams claimed he and his father were victims of a home invasion. But investigators found inconsistencies in his statements and other evidence, leading them to believe he fabricated his story. They found that the stabbing was the result of a “domestic incident” inside a home on the 3600 block of 3rd Street S.

Maxwell Adams, 18, of Arlington, VA was sentenced on Wednesday, September 13, 2017, in the Arlington County Circuit Court to thirty-two years in prison for his role in the homicide of his father, 46-year-old Dennis “Andy” Adams. Judge Louise M. DiMatteo sentenced the defendant to fifty years with twenty-three suspended for the charge of First Degree Murder and five years for the charge of Stabbing in the Commission of a Felony. The two sentences will run consecutively.

Initially, the defendant claimed he and his father were victims of an alleged home invasion. Through the course of the investigation, detectives uncovered numerous inconsistencies in the defendant’s account of these events and other evidence that lead them to believe his account was fabricated. Detectives ultimately determined that the stabbing resulted from a domestic incident that took place inside a residence in the 3600 block of 3rd Street S. and subsequently charged Maxwell Adams.

Arlington County Commonwealth’s Attorney Theophani K. Stamos said, “In her ruling, Judge DiMatteo gave the family of Andy Adams a measure of closure they have ached for since this awful incident. The defendant will now have the next 32 years of his life to contemplate from behind bars how his actions destroyed a family. There is no question that justice was done”.

Arlington County Deputy Chief Daniel J. Murray, Commander of the Criminal Investigations Division said, “Mr. Adams tragically lost his life in a senseless act of domestic violence by someone he spent his life caring for. Today’s sentence will not return Mr. Adams to his family, but we hope it provides some solace to know that the individual responsible will be held accountable for his actions”.

A dog is lucky to be alive after getting caught in a fence along I-395. Animal control officers from the Animal Welfare League of Arlington rescued the petrified pup from…

Peter’s Take is a biweekly opinion column. The views expressed are solely the author’s. Even prior to COVID-19, APS students’ reading proficiency had been on the decline–a problem which Superintendent…

Firefighters are working to rescue an injured driver after their car careened off the northbound GW Parkway and into a thick patch of woods, just north of Spout Run.

With the opening of a new concourse at Reagan National Airport, aircraft noise above Arlington remains at a high volume and the region is still studying ways to mitigate the…