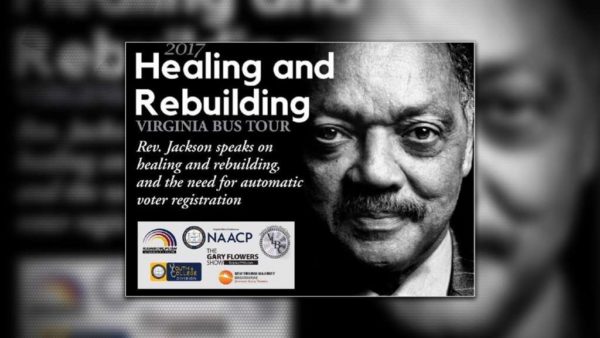 The tour is described as “a non-partisan, voter-registration drive across the commonwealth.”

Jackson and the bus tour are expected to arrive in Nauck around 6 p.m., in time to attend a Community Empowerment Rally at the Macedonia Baptist Church (3412 22nd Street S.) at 6:30 p.m.

A press release about the bus tour from Jackson’s Rainbow PUSH Coalition is below.

As Virginia prepares to hold its high stakes gubernatorial election – a contest widely seen as a bellwether of the crucial 2018 midterm elections – the Rainbow PUSH Coalition, the Virginia Legislative Black Caucus, the Virginia Conference of the NAACP, the New Virginia Majority and The Gary Flowers Show will add three days and 14 stops to a non-partisan, voter-registration drive across the commonwealth, from Monday, Sept. 18 through Wednesday, Sept. 20.

“You must register to vote today,” Rev. Jackson, founder and president of the Rainbow PUSH Coalition, told the students. “We marched too much, bled too much and died too young” for any American eligible to vote to sit on the sidelines.

Virginia’s gubernatorial election is Nov. 7, 2017, and its results, according to The New York Times, will “inevitably to be read as a harbinger for the 2018 midterm elections and President Trump’s fate.”

During the expanded tour – starting in Roanoke in southwest Virginia and ending in Arlington in northern Virginia – Rev. Jackson will encourage Virginians to support Automatic Voter Registration (AVR) legislation, which was recently passed in Illinois and could add up 1.13 million new voters to the rolls in the Land of Lincoln. Nationally, AVR could increase the rolls by 50 million new voters.

“Everything we’ve fought for the last 50 years is under attack – voting rights, LGBTQ rights, worker’s right, women’s rights, children’s rights, environmental protections,” Rev. Jackson, a two-time presidential candidate, said.  “But if we, the people, register and vote our interests and vote our numbers, we have the power to change the course of the country and history.”

The additional tour stops include voter registration and voter empowerment rallies at colleges, churches and community halls across the state.

As Rev. Jackson puts it, “The stakes are sky high.”