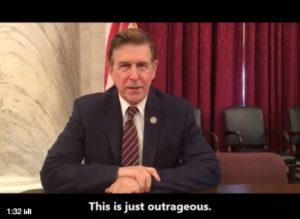 Arlington’s representatives in Congress are pushing back against a new Trump administration travel ban and the latest Obamacare repeal bill.

In a statement, Rep. Don Beyer (D-Va.) says the new version of the ban is little improved from the previous versions.

Donald Trump cannot camouflage his Muslim Ban by adding new countries to it. Its discriminatory roots are still plainly visible. This policy is an attempt to use racial and anti-religious animus to divide people for political ends.

As with previous bans, the Administration provides no evidence that they enhance public safety. Meanwhile, the ban continues to stigmatize millions of Muslim Americans, as well as our key allies in the war on terror.

This policy has been wrong from the start, it is wrong still, and I will continue to oppose it.

Also issuing a statement last night was Sen. Mark Warner (D-Va.), who weighed in on the latest effort to dismantle the Affordable Care Act, also known as Obamacare.

Warner said the bill, which faces long odds in the Senate, would do more harm than good. He called for a bipartisan effort to lower healthcare costs and stabilize the health insurance markets.

This evening, the CBO released a score concluding millions of Americans would lose healthcare under this latest partisan repeal plan. Just hours before, S&P released a report finding that the Graham-Cassidy bill would cost our country about 580,000 jobs and $240 billion in lost economic activity over the next decade. There’s a reason why this bill is opposed by non-partisan groups from every sector of the health industry, including the American Medical Association, health insurers, hospitals, patients, the American Cancer Society, and the American Heart Association. With even the center-right think tank AEI panning both this bill and the process under which it is being rammed through Congress, it is time for the Senate to put this bill aside and recognize that we must work in a bipartisan way to stabilize the health insurance markets and put in place permanent fixes to lower costs and expand health care options for Americans. I stand ready and willing to work with any Senator, Republican or Democrat, who seriously shares that goal.