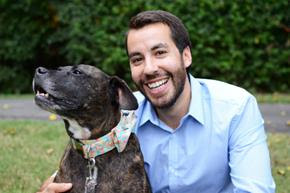 Samuel Wolbert is the new president and CEO at the Animal Welfare League of Arlington.

Prior to joining AWLA, Wolbert worked at a shelter near Lexington, Kentucky. Before that he was a legislative attorney for a nonprofit organization in Michigan.

“I am very thrilled to be here. I think we have a great organization. I look forward to continue working with the community to help grow it,” Wolbert told ARLnow.

The league’s former CEO, Neil Trent, had led the organization since 2010.

Wolbert currently has a dog and two cats and also has experience with fostering animals. He reports having a soft spot for senior animals and so-called bully breeds.

As far as his future goals for AWLA, Wolbert plans to start a monthly series highlighting the organization’s successes.

AWLA is hosting an event next week for the public to meet the new CEO and mingle with other animal lovers. It will run from 5-8 p.m. on Tuesday (October 10) at New District Brewing Company (2709 S. Oakland Street). Those who are interested in attending can RSVP online for the free event.