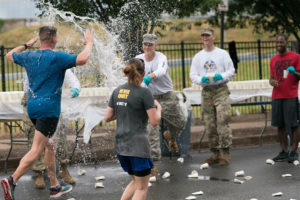 The Arlington County Fire Department had to roll out its mass-casualty ambulance bus to treat and transport dozens of runners suffering from heat-related illness during the Army Ten Miler on Sunday.

Race organizers shortened the course mid-way through the race, citing safety concerns amid unusually warm and humid conditions for an October day, WJLA reported. Sunday was “Washington’s sultriest October day ever recorded,” according to the Capital Weather Gang.

ACFD evaluated or treated a total of 145 patients and transported 34 to local hospitals, mostly due to heat-related incidents, Capt. Ben O’Bryant told ARLnow.com.

The fire department had staged two medic units on scene, with utility vehicles to transport stricken runners from the course, but called in an additional six ambulances around 9:30 a.m., O’Bryant said. The ambulance bus was called in shortly thereafter.

O’Bryant described the response as a “strike force” response, one level below a mass-casualty incident. All of the sirens were enough to attract the attention of Crystal City residents, one of whom took to Twitter to ask about it.

We are responding to medical emergencies around the Army 10 Miler as well as other emergencies in the area.

During the incident five ambulances from Fairfax, Alexandria and Reagan National Airport filled in as mutual aid at Arlington fire stations, said O’Bryant.