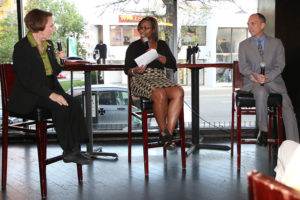 Libby Garvey has endorsed Erik Gutshall for Arlington County Board.

In today’s endorsement, Garvey said Gutshall — who handily won this year’s primary for retiring Board member Jay Fisette’s seat — will bring a breadth of local experience “to help guide the many difficult decisions that we have to make on behalf of our community.”

Today Libby Garvey announced her endorsement of Erik Gutshall for Arlington County Board. The victor on Election Day this November 7th will fill a vacancy on the board left by retiring County Board Chair Jay Fisette. Gutshall is the Democratic nominee.

“Erik has seen Arlington from many different perspectives: resident, APS parent, small business owner, charity board member, commission chair, and more. He will bring that breadth of experience to the County Board table to help guide the many difficult decisions that we have to make on behalf of our community,” said Garvey in making her announcement. She also noted that, “Erik and I have a shared interest in making county government accessible for all Arlington residents. I look forward to working together with him to ensure that we listen to all residents and communicate effectively with them, and that we streamline public processes so it is easier to engage, and create new channels for residents to observe and participate in their government.”

In response to Ms. Garvey’s endorsement, Gutshall released this statement:

“I am honored and very grateful to have Libby’s endorsement; it means a lot to me. I’m ready to roll up my sleeves and get to work with Libby and the other board members to reboot civic engagement. I believe we reach the best decisions when we rely on accurate data, transparent and impartial analysis, and fair consideration of all viewpoints. The chief responsibility of the County Board is to create the environment for good decision-making by ensuring our county government conducts every transaction with our community in a totally honest, transparent, and open manner. Residents should never feel that an answer was already baked into the process. We both agree this is the essence of solving our problems as a community.”

A wild scene played out Friday night along a quiet, dead end street in North Arlington. The incident happened around 9 p.m. along the 3900 block of 26th Street N.,…