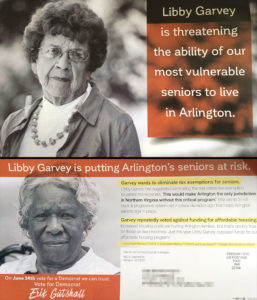 Update at 4:30 p.m. — Gutshall’s campaign has published an explanation of its claims here.

Libby Garvey says she’s not “threatening the ability of our most vulnerable seniors to live in Arlington,” as alleged in a mailer from the campaign of County Board challenger Erik Gutshall.

The mailer, sent in advance of the June 14 Democratic primary, said that Garvey “wants to eliminate tax exemptions for seniors” and “repeatedly voted against funding for affordable housing.”

(Another Gutshall mailer alleged that Garvey, who formerly served on the School Board, did not act quickly enough to address the capacity crunch at Arlington Public Schools.)

Garvey is firing back at the “putting Arlington’s seniors at risk” mailer, posting a response on her website entitled “Setting the record straight: I want seniors to afford their homes.”

I work hard for an Arlington that provides affordable living options for all people, of many income levels and at all stages in their lives. We face many challenges in realizing this vision, and one particularly acute one is how to help seniors whose property tax bills are rising beyond their ability to pay because of the ever increasing value of their property. We need to make sure that they can remain in the homes where they built their lives and helped build our community.

My opponent in this election recently sent a flyer claiming that I am “threatening the ability of our most vulnerable seniors to live in Arlington.” I assure you that this claim is false.

Arlington has two major programs for senior tax relief. One defers taxes until the house is sold, at which time the back taxes are paid from the proceeds of the sale. I believe that we probably should lower the qualification levels for this program so that it is available to more seniors. The second program forgives the taxes entirely. Under this second program, when the home is sold, whoever sells — whether the senior or the beneficiaries after the senior’s passing — keeps the entire proceeds of the sale and never pays the taxes. This can provide quite a windfall to the beneficiaries.

I, along with the entire County Board by a 5-0 vote, asked our staff to study these programs to see if we are publicizing them adequately. We did this to ensure that everyone who needs them is benefiting from them. We also asked our staff to review the criteria for appropriateness to see who is truly benefiting from them. Among the questions we asked our staff to consider is the possibility of eliminating that portion of the tax forgiveness that goes only to beneficiaries, because the program was never meant to benefit beneficiaries — it is meant to benefit seniors. I want our staff to explore whether making this change will free up more money to enable us to expand both programs for our most vulnerable seniors.