The roofs of D.C. taxis could be set for electronic advertising that can update in real time or be targeted to specific areas thanks to a new startup based in Rosslyn.

Above and Beyond Media Group launched October 1 after a year of planning and writing its software. It uses double-sided LED screens on taxi roofs to get advertisers’ messages out. And Arlington County residents might be familiar with them already, as ABMG sent prototypes out and about during the spring and summer to test the technology.

“It’s kind of a breakaway from the traditional paper and plastic that most outdoor utilizes,” said founder and CEO Eric Lekuch. “It’s kind of wasteful, and ours is seamless in that it can edit on the fly, it can be real time, there’s no real waste involved and production costs are pretty minimal.” 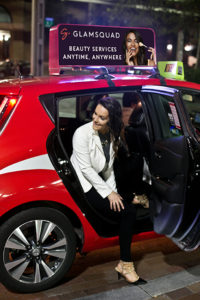 Lekuch said the idea to partner with taxis in D.C. came about three years ago, when ride-hailing apps like Uber and Lyft started to take hold across the region. With many cab drivers and companies investing in electric cars, he said they wanted to find new revenue streams to make up for the lost income.

“They’re telling us how much they’re losing every week and every month and in any given year due to increased competition,” Lekuch said. “So we’re helping bite into that.”

A SIM card loaded in each advertising box has internet access, meaning updates can be made in real time. So, Lekuch said, perhaps an advertising partner like one of the local lotteries, theaters or arenas could change information with ease.

He said it could also be helpful with governmental partners, who could advertise the likes of amber alerts or other public safety announcements quickly and easily.

And in addition to the real-time updates, the SIM card keeps constant track of its coordinates as the cab drives around. Lekuch said it can be programmed in such a way that when a taxi enters a certain neighborhood or part of town, the display changes and could advertise something specific to that area. Lekuch described that service as a “premium add-on.”

“There’s definitely an interest if you want to target, maybe by Capital One Arena or Navy Yard, there’s always an interest if someone only has one store or one restaurant and want it to appear if you’re in [that neighborhood],” he said. 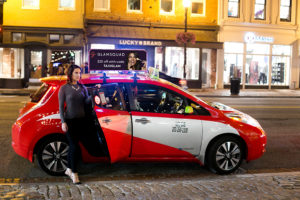 To test the technology, ABMG made use of contacts in the startup community before sending the advertising boxes out on the street. Lekuch said he received plenty of positive feedback already from Arlington.

“We have a lot of friends in the startup industry,” he said. “They’d send us some content and once it hits Wilson Blvd. or Courthouse, or the Ballston corridor, an ad will appear. It was cool to test that, and it works and we can do that, but also to meet more readers of ARLnow in an environment where you’re not really expecting it.”

Lekuch said he is hopeful of ABMG getting a foothold in the D.C. area before possibly expanding to other cities.

Photos via Above and Beyond Media Group